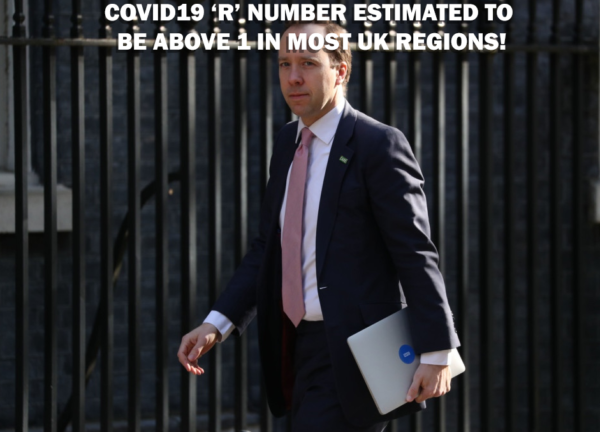 Shocking new data published by the ‘Center for Mathematical Modeling of Infections diseases‘ indicates that as of the 16th June, the estimated Coronavirus reproduction rate (R) could be ABOVE 1.0 in all but TWO of the UK’s twelve regions.

VB has been following this data since learning that Government officials have been using them to make decisions. Leicester’s Lockdown lends credence to the validity of this data!

An important point of concern is that these estimates correctly predicted that the R number was 1 or higher in the East-Midlands. Leicester, the East-Midlands largest city, is now facing a “local lockdown” in an attempt to stop a Coronavirus outbreak.

Experts are right to question the speed of governments response to Leicester outbreak. Estimates VB has show the East-midlands R number may have been above 1 as early as the 29th May! (If VB knew about it, Government knew about it!).

Where is R the highest (in the UK)?

Interestingly, while the same data had shown the R number in the East-Midland had risen over recent weeks; the most recent data points to a slight drop in reproduction. However, it should be noted that these stats only provide the regional R numbers and not for towns and cities.

With Government planning on reopening England in 4 days time, Boris may want to keep a firm hold of the ‘brake’. If the# estimates are accurate (they HAVE been) then we may be on the cusp of the dreaded ‘second wave’.

EDITOR NOTE: I just wanted to add; this is not the only data set which is used to influence Government andLocal authorities. Other Datasets exist. While, yes, this data may be accurate for East-Midlands it does not mean we should all be scared. Plan (calmly) for the worst, and HOPE FOR THE BEST! /VB