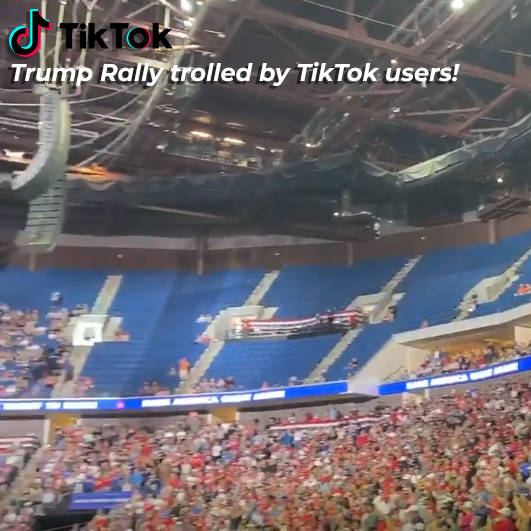 President Donald J Trumps re-election campaign has been rocked by a humiliating, and hilarious internet prank. Millions of TikTok users successfully tricked the Trump campaign into thinking hundreds of thousands of people wanted to attend his first 2020 campaign rally, while at the same time blocking thousands of Trump supporters from obtaining tickets.

In reality, images and video footage from the event show that Team Trump struggled to half-fill the 19,000 seater stadium; However, Trump relied on his TV background to frame everything so it would appear as that his rally was busier than ever.

President Trump’s opening rally of his 2020 campaign was as radical as ever, with hundreds of rabid Trump fans cheering a host of right-wing speakers before getting to the main event; President Trump. During the campaign speech, Trump went out of his way to explain how to walk down a ramp; and proved to the world he can drink a glass of water, with one hand! Vintage Trump!

In the lead-up to last nights rally, Trump Campaign Manager Brad Parscale bosted that 300,000 tickets had been reserved for the event; then he announced 800,000 reservations! It was not long until President Trump himself took to Twitter to celebrate the massive interest in his upcoming rally!

A crowd full of empty chairs

In a very, very embarrassing turn of events, as the 2020 Tulsa rally’s doors opened, it soon became evident that something was up. Half the seats in the 19,000 seater area looked to be empty! The Trump Campaign was quick to react, blaming the lack of attendees on the media scaring the Trump supporters away with ‘threats of violent protestors’.

Rise of the Zoomers!

Many social media users were quick to correct Parscale and President Trump on the reality of their situation. The internets political commentators and democrat politicians took great pleasure in pointing out that Trump Campaign were the victims of a huge Troll by TikTok’s users.

The hilarious TikTok-based troll campaign looks to have originated from campaigning ‘grandmother’ Mary Jo Laupp. In her video, Laupp tells viewers how the campaigns ticket reservation system works, by taking everyone’s telephone numbers so they can send them campaign SMS messages.

Laupp went on to tell people how the ticketing system can be used to reserve most, if not all of the events 19,000 tickets; With the hope that the stadium would look bearly-full, or empty.

The plan was devilishly simple and seems worked viciously well, with every camera angle other than the ones looking directly at President Trump illustrating the embaressingly sparse and depressing turnout.

I was going to use this paragraph to tell a joke about “well, at least the supporters who were able to get a ticket were able to remain socially-distanced” but I can’t. The sad fact is that those in attendance all chose to sit as close as they could to one another. Occasionally, a lone-Trump supporter would be seen, alone, at the back of the bleachers. Ironically, the only people seen wearing masks were the people in the deserted high-up seats. Those people, THEY are relatively speaking, the ‘smart’ ones.

While Team Trump tries to blame the media or invent stories about anti-racism protestors at the event for the lack of support at the Tulsa rally; The reality is that the ‘TikTok kids’ have managed to expose a huge vulnerability in the Trump campaign, the disconnect between young and old. Trump as a person has little to no connection with the Youth of America, and his team was so out-of-touch that they had no idea what was happening to their event!

If Trump’s campaign had spent half an hour on Tiktok and paying attention to the youth of America, they could have seen this coming. But, they didn’t, they were completely blind to the situation.

Trump is a 70-odd-year-old “billionaire” who seems to fight every cultural war the youth of today feel need fought. He is an old man who lives in his own Trumpian bubble, where things like being casually racist or casually misogynistic are fine. There is literally nothing within Trump’s character or brand which is relatable to most, if not all of America’s youth; and it is this which may be his downfall in the 2020 election.

Four years ago, Trump was able to use his reality TV appearances and links to companies like WWE to make him relatable to young joey public. But now, four years on, the thought of Trump being on TV, in an entertaining capacity seems alien (I mean, it felt alien 4 years ago, but it’s even worse now!)

This 2020 US election looks like it’s going to boil down to a battle between Anonymous, ANTIFA, Black Lives Matters, the gen-z’s, the Zoomers, the K-pop stans and a few Millenials, all fighting the out-of-touch baby boomers!

What are your opinions on Trumps 2020 rally and him being trolled by TikTok users? Follow Voice Britannia on Facebook and tell us what you think!

Will Trump win another 4 years, or will the internet come through and save Americ?