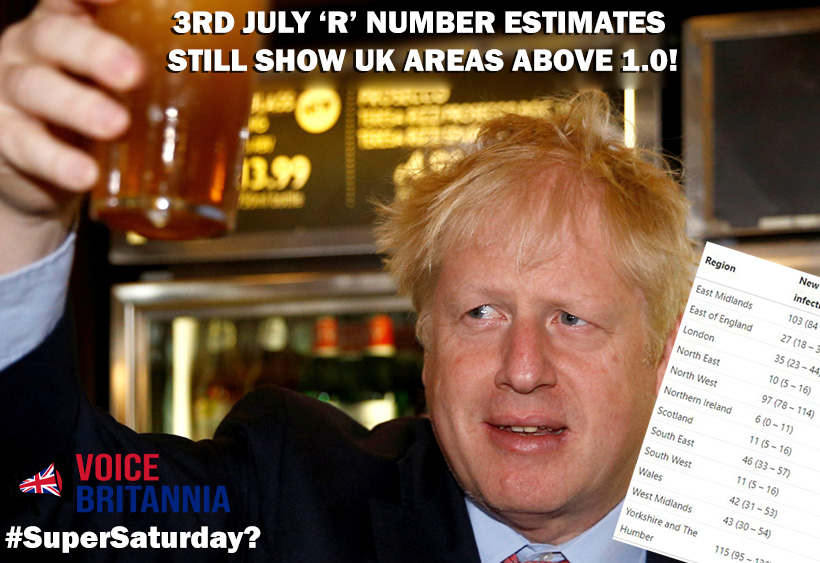 New data released shows the UK’s ‘R’ (reproduction) number is still close to 1.0 in many areas, with it being reported as high as 1.3 in Northern Ireland. Scroll down to see the UK’s national R number estimates.

The data released by CMMID shows an overall better picture than the previous week’s data, with decreases in Estimates across the country. However, while the estimated R numbers are falling most regions; R is still estimated to be estimated between 0.9 and 1.3 nationwide.

The UK’s R number is estimated to be sitting around 0.9.

The new estimates are promising, but not good!

While the R rates are heading in a good direction, business owners and those looking to cut loose during the weekends ‘Super Saturday’; medical professionals have warned that the reopening of pubs, and the loosening of lockdown, is coming too fast.

Currently, 8 of the UK’s 12 regions are estimated to have an R-number of 0.9 or higher, with Northern Ireland having the highest estimate of 1.3, although this could in be as high as 2.2!

Health experts have warned that that rushing to open Englands businesses could risk a second Coronavirus wave; and a second national lockdown. Scotland’s leader Nicola Sturgeon has decided to take a much slower path out of lockdown.

Did Sturgeon have the right idea?

Scotland is also relaxing their lockdown this weekend, with Scots allowed to visit beer gardens. Sturgeon has faced criticism from Westminster on her slower exit from lockdown; However, with Scotland having one of the lowest R numbers, it could prove that Sturgeon had the better plan.

Boris Johnson will be hoping that his economy-starting booze-fueled weekend is not ruined by the realities of Coronavirus; and the risks that come with allowing masses of drunk, potentially asymptomatic people to gather en-mass. Only time will tell, stay safe!

Last week, Voice Britannia published estimates from this source (CMMID); Leicester was the first area to face a ‘local lockdown’; Providing a degree of verification to the estimates which showed the East-Midlands as having one of the highest R numbers in the UK. These estimates only show a region-wide view and so not show individual towns or Cities.

What do you think? Are you getting ready for a Super Saturday in the pub, or will you be avoiding Super Spreader Saturday?