Anna Soubry’s Prediction: ‘The UK will rejoin the EU in 10 years’. Is she right? 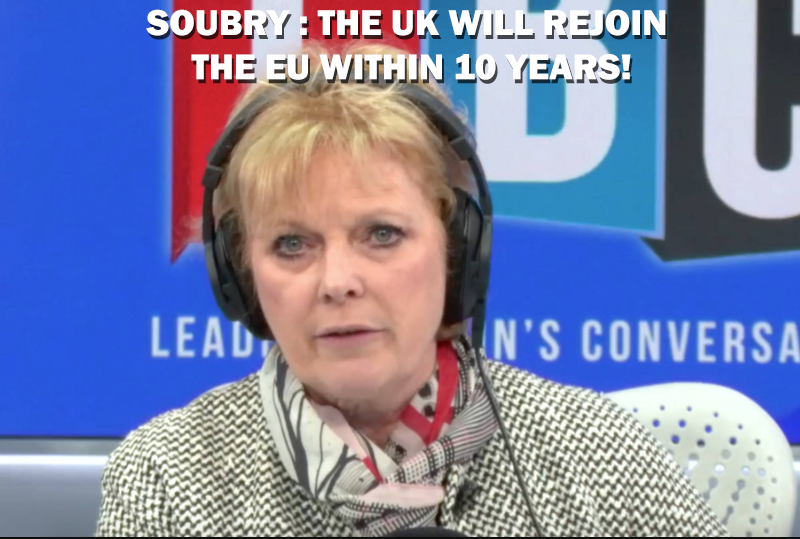 Hardline remainder and TIGGER Anna Soubry appeared on LBC this morning, claiming that the UK will be an EU member again; Within ten years!

After more than four years of negotiations, deals, arguments and THREE Prime Ministers, the UK will be leaving the EU on the 30th of December at 12 am. It now looks most likely that the UK will leave the EU with future no trade deal.

Speaking to Nick Ferrari, Soubry claimed that history will remember Brexit as a big mistake; and that as soon as the implications of Brexit become visible, the public will become fed up.

However, the former Conservative admitted Brexit was a done deal, saying: “I don’t think there is an appetite at large for a movement that would win widespread support for re-joining the EU at this time because we haven’t even left yet. “I think we’ll be back in the EU in ten years time”.

Aubrey said that in the near-future, problems with the British ecconomy will be blamed on COVID19. The reality she said, is that any future economic strife the UK may face will stem from the fact we’ve left the EU.

Ironically, there are many within ‘remain’ communities who would put as much blame on Soubry and her Change UK’ cohorts for stalemate and eventual no-deal ending than anyone on the Labour benches!