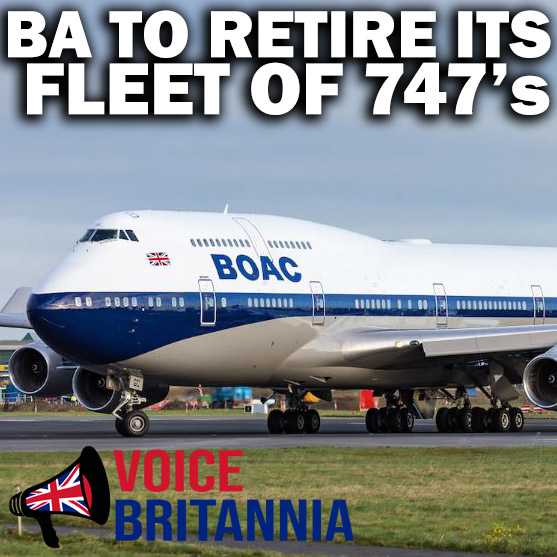 British Airways (then BOAC) have flown people around the world in the iconic 747 Jumbo Jets since April 1970, just over fifty years ago. Today, British Airways have announced they are to retire their entire fleet of Boeing 747 jets due to the downturn in business caused by the COVID19 Pandemic.

The Boeing 747 ‘queen of the skies’ has been in active service, flying people between far off lands since the 1960s. For most of its life, the 747 was the largest passenger plane in service carrying between 416 and 660 passengers for a range of up to 7260 nautical miles! It was not until the introduction of the Airbus A380, in 2007 that a bigger passenger aircraft came into service.

In the years leading up to the COVID-19 pandemic, airlines and aircraft producers have been looking to phase out the 747, the A380 (already) and other ‘4-engine’ widebodies jets with a view towards migrating to large jets with only 2 engines. When the 747 was launched in the 1960s, engine reliability and flight rules meant that long-range jets were required to have more than 2 engines so that if they had trouble with an engine they could land safely.

As technology has improved over the years, the requirement for 4 engines has been phased out and replaced by much more efficient, reliable and environmentally friendly jets such as the Airbus A350; or the soon to be launched Boeing 777X.

A BA spokesperson told BBC : “It is unlikely our magnificent ‘queen of the skies’ will ever operate commercial services for British Airways again due to the downturn in travel caused by the Covid-19 global pandemic

“It is unlikely our magnificent ‘queen of the skies’ will ever operate commercial services for British Airways again due to the downturn in travel caused by the Covid-19 global pandemic,”

This announcement from British Airways will be sad news for plane geeks and enthusiasts (like your writer), however, the retirement of the 747 fleets will hopefully make space for the next generations of mass-air travel.