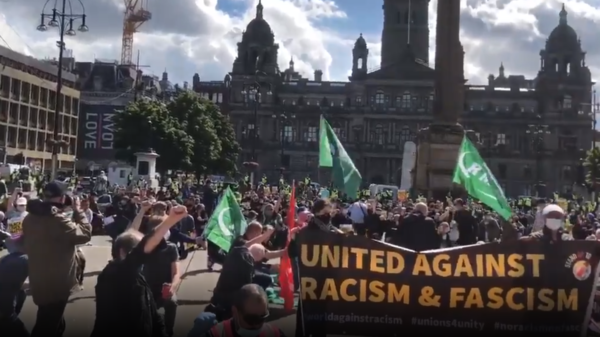 All too often these days, we sit and write about protests descending into violence, but today is hopefully a refreshing change. This morning, hundreds of Black Lives Matter and anti-fascist protestors filled George Square. Protestors ‘took a knee’ in a mass display of solidarity and peaceful protest.

‘Taking a knee‘ is done to show solidarity with the Black Lives Matter movement‘s protests against police violence.

This morning, police moved in to block a group of unidentified protestors who were walking through central Glasgow. Police were quick to act against the group of protestors who were mostly dressed in Black. Police look to have split George Square in half, in efforts to keep groups of protestors apart. We are unable to confirm if the group spotted was related to the Black Lives matter movent or far-right counter-protestors.

Recent protests connected to the Black Lives Matter movement have been mostly peaceful; however, protests have been connected to flare-ups of social disobedience with over 140 arrests made within one 7 day period. Prime Minister Boris Johnson described previous violent protestors as “subverted by thuggery”; Home Secretary Priti Patel reminded all protestors that ‘all large gatherings are currently unlawful’ due to the COVID19 pandemic.

Violent counter-protests in Glasgow last weekend were been linked to neo-nazi group ‘National Rebirth Scotland’; who claim to plan on disrupting future anti-racism protests. Police in Glasgow, and London, are on full alert with groups of ‘patriots claiming to ‘guard statues’; The counter-protestors began to arrive in the wake of the removal of ‘slaver’ Edward Coulson’s statue. Police have warned to they will take firm action on anyone breaking the law.