Police told a black woman “You are just jumping on the bandwagon” after being suspected of a crime, for LOOKING at police officers! 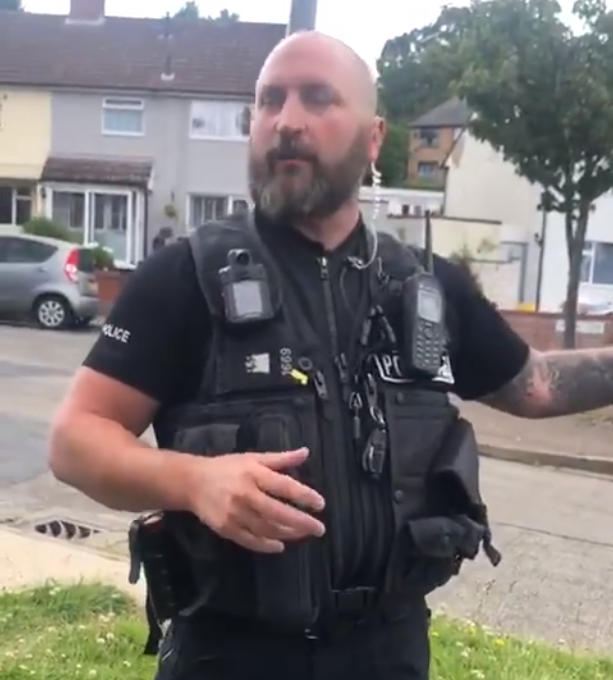 Shocking scenes were recorded in Ipswitch yesterday. A video has appeared on social media which shows police officers unfairly profile black couple as suspects of a crime. Police claimed the pair had made the terrible mistake of looking at them!

In the video, the bearded officer can be heard starting his explanation to the couple by “whether it looks funny or not, you were driving a motor vehicle on the road”. This statement of the obvious, and the connotation that “driving on the road” was being treated as ‘suspicious’ unsurprisingly baffled the couple. The officer went on to claim that because the couple was driving, a car, on the road, he said: “I am requiring you, to show us proof of drivers license”.

In what appears to be an abuse of power, the male officer tells the couple: “I want to confirm that you are the driver of that vehicle and that you live here. Then we are gone”.

Driving on the road is not a crime and in most cases not suspicious.
Parking a car is not a crime. Driver DO NOT have to show their driving licences to officers on request.

This appeared to be about race

The female officer told the couple : “what you have done is turned something that could have been really easy; you started getting irate, and you have turned it into something it shouldn’t be”. In scenes which will be reminiscent to many in the UK’s BAME communities; or those who have had to deal with the ‘bad apples’ in the past.

The post-racial cherry on the cake happened when the female officer told the woman “you are just jumping on the bandwagon”; indicating she believes she is using her race as to paint the officers as ‘in the wrong’. The reality is that in this case, the police WERE wrong!

This comment from the female officer is perhaps the most telling. Before she even spoke to the couple the officer has prepared her excuses. Using the Black Lives Matter movement as a reason to discount black person story is tone-deaf at best; at worst categorically racist.

This story illustrates how Police forces in the UK have a long way to go when dealing with race, and in learning that dark skin is not suspicious.

This story was posted to social media by ‘Maja’ (@maobxby). Maja runs a program which helps gets books on race to people who can’t afford them. If you would like to learn more on racism, history, or want to support her cause, visit her page here.