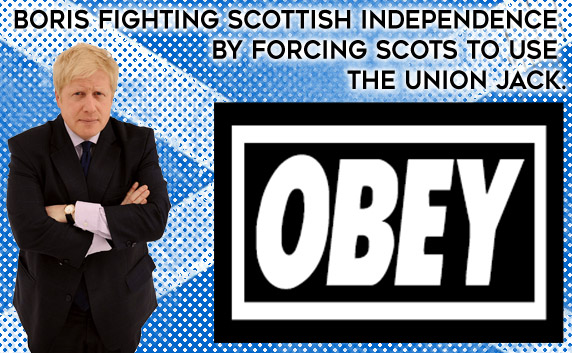 It has been reported that Boris Johnson is planning to force Scottish projects that have received assistance from the Westminster Government, to use a ‘union jack emblem’, has part of his drive to win Scots over to the thought of remaining in the Union.

As a writer and Scottish resident, this idea comes across as one of the most tone-deaf moves Boris has made yet in his quest to ‘win Scotland over’. Every year, heck, every MONTH, there are stories in the Scottish news on the bad feelings the Union Jack flag creates for some in Scotland.

To some scots, the Union Jack is as controversial as the Confederate battle flag is to some Americans. For example, there are many Scottish people who will simply not look at this website because they see the Union Jack in the logo. (It has become a problem in trying to hire Scottish writers). It may seem irrational but there is Scot’s who see the Union Jack as an overt symbol of oppression, and a manifestation of the feeling of being ‘powerless’ that many scots have.

Every so often, tensions raise over the use of the Union Jack ’emblem’ on goods which are made in Scotland; As every time the Union Jack is painted over a Scottish product, many see it as an attempt to delete our national identity, our heritage, our culture, our history and the 300+ years of geopolitical gaslighting from Westminster’s ideologically-conservative upper classes.

Don’t believe me? Go to a supermarket and look at where some of the ‘British’ products are made.

England is a proud nation. Many believe America is the ones who take national pride to the extreme, but in my opinion that is not true, that award goes to England. Have you ever lived or worked in England during the Football World Cup? Or worked on St Georges Day?

Funny story, on the 1ST of July 2006 I lived in central Blackpool (England), and England’s football team was playing against Portugal in the World Cup quarter-finals. England lost. As the goals went in against England, I heard the guy next door get angry and something was thrown against the wall; Then, when the final whistle blew, there was a lot more noise … then his TELEVISION came crashing through THROUGH the window to its concrete demise.

It taught me that England takes England VERY seriously!

Sadly, it is this pride which has been weaponised. Boris’s attempts to ‘win Scotland over’ amounting to political trolling, exploiting the national pride which made him attractive to many, while using the minority of Scots who agree with his brand of pish to amplify whatever he says (with the help of his media partners).

It is important to remember is that in Scotland, the Tories are the political MINORITY! Supporters of Boris Johnson are in the MINORITY and supporters of Scotland remaining as a part of the British sinking-ship are now IN THE MINORITY! Sadly though, the MINORITY is supported by the UK Government and thus it’s voice will always be amplified.

From the end of the ‘Brexit transition period’ (31ST December), Boris Johnson plans to start stamping the ‘Union Jack Emblem’ onto projects in Scotland which have received funding from Westminster.

The Prime Minister hopes that this move will drive support for the Union in Scotland; however, Forcing Scottish people to use the Union Jack, after the country has been dragged out of the European Union against its democratic will, most likely without any trade deals has to be one of the most tone-deaf plans Boris Johnson has ever had. It’s almost insulting.

You do not need a crystal ball to realise this is a bad idea. Yet again, Boris Johnson proves himself to be the greatest political tool Scottish Independence has ever had. No person has divided the British union more than Boris in its 313-year history, and that includes Margret Thatcher!

Why is it that England, Wales and Northern Ireland are allowed to be proud of their nation, but whenever Scotland dares to pop its head above the parapet we are framed as a traitorous minority; When the reality is we just want to be as proud of our nation as England is allowed to be about theirs!

Why can’t we be proud of OUR nation, OUR SCOTLAND!