Brexiteers FURIOUS as they discover the new blue ‘Brexit passport’ is actually black! 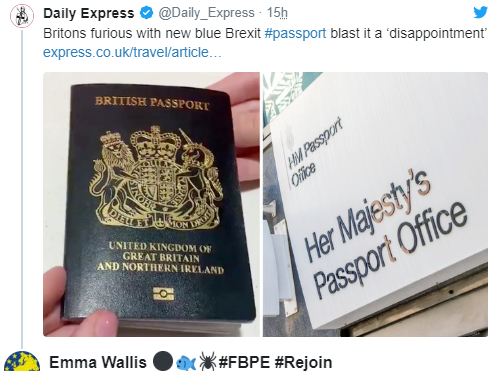 The topic of passport colours became one of the most emotive Brexit related topics. Brexiteers demanded their original ‘black’ passports back!

In what can only be described as a case of mass-mandella effect; people are now discovering that the passports, were in fact previously BLACK!

Voice Britannia was alerted to this story by Tim Fentons ‘Zelo Street’ blog. Tim’s blog provided an image of an old passport for anyone who may have forgotten what they looked like. Please, study the image below.

Jacob Rees-Mogg described bringing the black passport back as the “cherry on the icing” of Brexit. Since the EU referendum, debates have raged about passport colour, the wording and where they are made. The post-Brexit passports are ironically made in Poland, within the EU!

Anger at the black passports has boiled over into social media, with some blaming Boris Johnson for what seems like yet another Brexit related gaff by his Government; However, The blame for this more likely lies with the previous Government; and the conservatives current culture of deception and ignorance of reality.