COVID-19 Reproduction rate now above 1.0 in MOST UK REGION! (as of 18th July) – The Super Saturday second wave begins! (UPDATED) 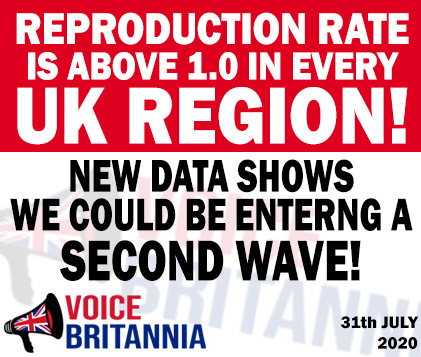 This post was updated at 13:04 to add a comment on Governments ‘official’ R-number report. The new information is at the bottom of the article.

Voice Britannia posts the regional R numbers which are produced by CMMID’s dataset (which is in turn fed into Government). Usually, we would only report these once a week. Today there was an update to the data – taking it up to the 18th of July, and due to its seriousness, we felt we needed to report this.

Overnight, CMMID updated its UK regional modelling of COVID-19 cases and infection rates using data up to the 18th July. (yesterday, we reported on data up to the 14th of July).

Worryingly, the UK’s Reproduction number (R) is still at 1.1 (between 1.0 and 1.1, however, the modelling data expects the R number to ‘increase’, which could be a worrying signal that a second wave HAS started to spread throughout the country.

The worst is still to come!

Looking at the regional R-number’s we can instantly see that 7 of the UK’s 12 regions are all marked as sitting at R = 1.0 or higher. However, more worrying is the R ranges as every single region in the UK is marked as having the potential of its reproduction rate being above 1.0!

It is difficult to ascertain which region has it worse. Overnight Government announced further lockdowns in greater Manchester, Blackburn with Darwen, Burnley, Hyndburn, Pendle, Rossendale, Bradford, Calderdale, Kirklees and Leicester.

With the R numbers rising so observably quickly across the entire UK, Government are likely to rush towards locking down more of the country in a futile effort to try and stop the virus spreading, AGAIN!

Last night, Matt Hancock issued a statement on the latest lockdowns in the North West, Greater Manchester and Yorkshire; which he used to blame the citizens of these areas for ignoring social distancing guidelines while indoors.

Hancock’s view is not only wrong but it is very unfair. The scientific consensus is that it takes 3-4 weeks for the effects of mass gatherings to show in terms of COVID-19, so whatever caused this ‘second wave’, happened then. To find the cause of this spread we have to look for mass gatherings 3 -4 weeks ago.

Little over 3-weeks ago, on the 4th July, Boris Johnson and Rishi Sunak rushed ahead with their ‘Super Saturday’ plans to reopen ALL of England’s pubs and bars. It is now the 31’s July, 3-and-a-bit weeks since the pubs reopened and people were allowed to get drunk and gather en-mass.

SAGE told Government opening the pubs was a bad idea; The INDEPENDENT SAGE group told them it was a bad idea, and pretty much any expert with a voice directly told the government that REOPENING PUBS WAS A BAD IDEA! Yet, they still went ahead with the plans.

To keep their business community doners happy, Boris and Rishi reopened the pubs and allowed people to get drunk and mingle with one another in the middle of a GLOBAL PANDEMIC, and now, three weeks on, just as ‘the science’ predicted, we have clear evidence of the second wave, which looks to be caused solely by inept politicians.

Government has now released its own reproduction (R) number report. Government state that the R-number is sitting between 0.8-0.9; HOWEVER, in the same report, SAGE directly state that Englands Reproduction number is above 1.0!

SAGE Said: “Models that use COVID-19 testing data that have less of a time delay, have recently suggested higher values for R in England. For this reason, SAGE does not have confidence that R is currently below 1 in England. “

It is unclear what government wants to achieve by releasing contradictory information in this way. SAGE seems to believe, much like the CMMID data shows, that the UK’s R number is now at 1.0 and projected to rise further.