UK Government spends ANOTHER £100 MILLION on yet ANOTHER Dominic Cummings project – TO CLEAN AIR! 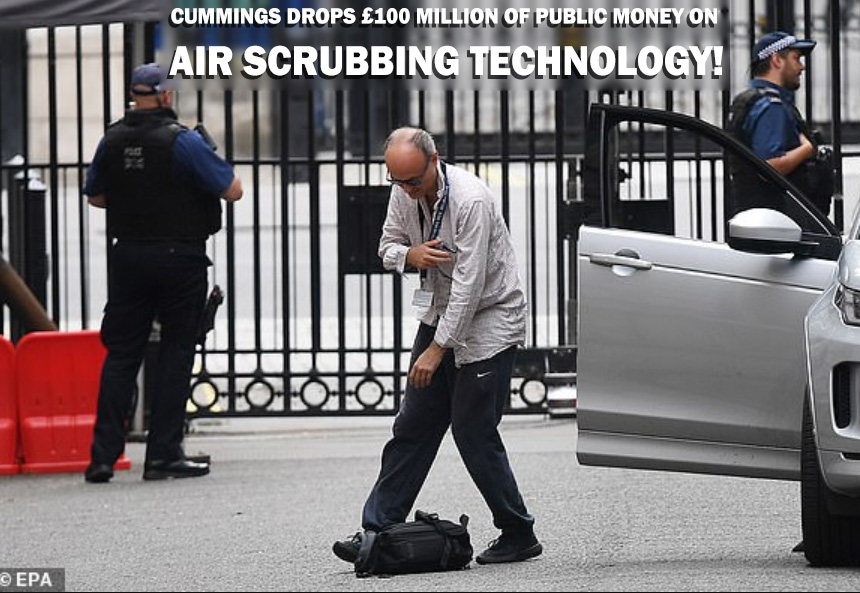 Only a week or so after VB confirmed that Dominic Cummings directed Government to spend £500 Million for a stake in a bankrupted Satelite company, it seems Dominic Cummings has begged his way to spend ANOTHER £100 million … on AIR SCRUBBERS!

The Times reports Dominic Cummings has been obsessed with the cutting-edge technology to clean the CO2 from the air; however, many in Whitehall think Cummings is full of how air! The plan which Cumings is said to be ‘obsessed’ with; work by sucking air through a system which ‘captures’ the carbon within a substrate, before heating the substrate and extracting the carbon before burying it underground.

One problem with the air-scrubbing system Cummings intends on staking his carbon-free future on, is cost. Research has shown that the ‘carbon capture’ technology Cummings is eyeing up requires a huge amount of energy to extract the carbon before its storage; Driving the cost-per-ton of CO2 to as much as £500 per ton!

Cummings is thought to believe a ‘substantial’ early investment in the technology could, again, make the UK ‘world-beating’; However, experts in and around the British gears of power are sceptical that the investment will deliver any value. An unnamed Whitehall spokesperson told reporters “Dom had become obsessed by this. He’s the one that has been pressing it regardless of huge scepticism from authorities. But he’s got their way”.

In recent weeks, Voice Britannia has reported on almost £1,000,000,000 (ONE BILLION) worth of contracts which include £108 Million for PPE to a company that sells Coffee and Nuts, and the aforementioned £500 Million for a stake in a Bankrupted satellite provider.

Where IS the money going?

At the writing of this article, Voice Britannia has not been able to find the tender information, or the contract Government has issued for this project. This is a problem which is occurring with almost every Government contract we now see. If we cannot see what the Government is doing it makes it hard to hold them to account. BUT WE WILL TRY!

Where Is all this money going?