Is Donald Trump fit enough to complete a second term if he wins? (IMO NO CHANCE!) 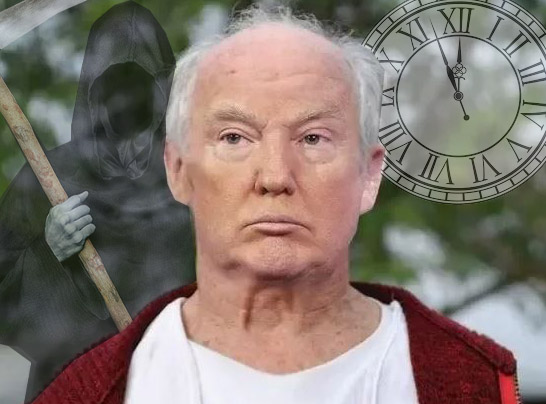 Ever since the shocking 2016 US Election, one question on everyone’s mind about Donald J. Trump, whether you love him or hate him, is if he can literally survive another four years in the White House.

Serving just a single term in one of the most powerful positions in the world would be enough to degrade the vitality of even the healthiest specimens. So, how could a second term possibly not be too much for the geriatric, morbidly obese, and mentally unstable individual who currently holds the US presidency?

The speed and agility of a pregnant manatee.

We all saw the video where the president of the United States descends a metal ramp with the speed and agility of a pregnant manatee after the US Military Academy’s commencement ceremony.

Although he would claim that the seemingly clear indication of agedness and/or physical unfitness was merely due to a poorly constructed and insanely steep incline, with absolutely no handrail, that was made wet and thus slippery by recent rainfall. These facts are, as ever with President Trump, in dispute.

And those of us who have been paying attention to what’s trending know that, at least in more and more people’s minds, #TrumpIsNotWell. But of course, he would write off any questions about his physical health and the risk it poses to the country as baseless attacks from the ‘Alt-Left America-Hating Terrorist Dems’.

One might say the situation is a ticking time bomb, and unluckily for Americans, that bomb just so happens to be the McDonald’s-crusted heart of stone located inside the chest cavity of the 243-pound 45th president.

It is worth noting that, at 70, President Trump is the oldest first-term president in all of US history. It is also worth noting for anyone making the “Trump old” argument that Biden, if elected, would be 78 at the time of his hypothetical inauguration, stealing that title from Trump, which the president would almost definitely begrudge him for.

Let’s take a look at some of the key things to objectively worry about with this particular president, whether you’re a vehement hater or an avid fan.

Is Trump old? Yes. All ageism aside, it cannot be denied that growing old slows you down (although many seniors would argue it’s the world that’s been sped up). One cardinal trait of any world leader is being able to make snap judgments in high-pressure scenarios since major world events don’t stop happening just because the president is having a senior moment.

Say what you will about Donald Trump, but no one really wants a dead president. It’s terribly inconvenient. And hearing the words “President Pence” is enough to make anyone reconsider their secret or not-so-secret presidential death wish that they might be harbouring.

What if he were to choke on his Big Mac?

No one can be sure what a Trump second term would mean, and we can’t possibly know until after US Election this November. For those hoping to see a Trump second term, they might continue to wave their MAGA flags and wear their red hats even if he loses. They might also mourn him as a hero if he happened to have a stroke or a heart attack, or if he were to choke on his Big Mac and Ivanka was conveniently unable to perform an effective Heimlich manoeuvre.

Trump has spontaneously tweeted a defence of himself against conspiracies that he had been hospitalized for “mini-strokes.” This led to a lot more people wondering if he had been hospitalized for mini-strokes. If you ask him, it’s all FAKE NEWS. To be sure, a Trump stroke, big or small, is no good thing for US citizens, nor is a Trump stroke any good for the US’s national security or its standing in the world.

It seems that the conclusion of any intelligent and fair-minded individual would be that Donald Trump is clearly in poor health that is only declining and is too old to continue with this twisted madhouse he’s concocted out of US politics.