Echo without responsibility – Why the Echo’s behaviour crossed the line – Can we change how independent journalists are treated? 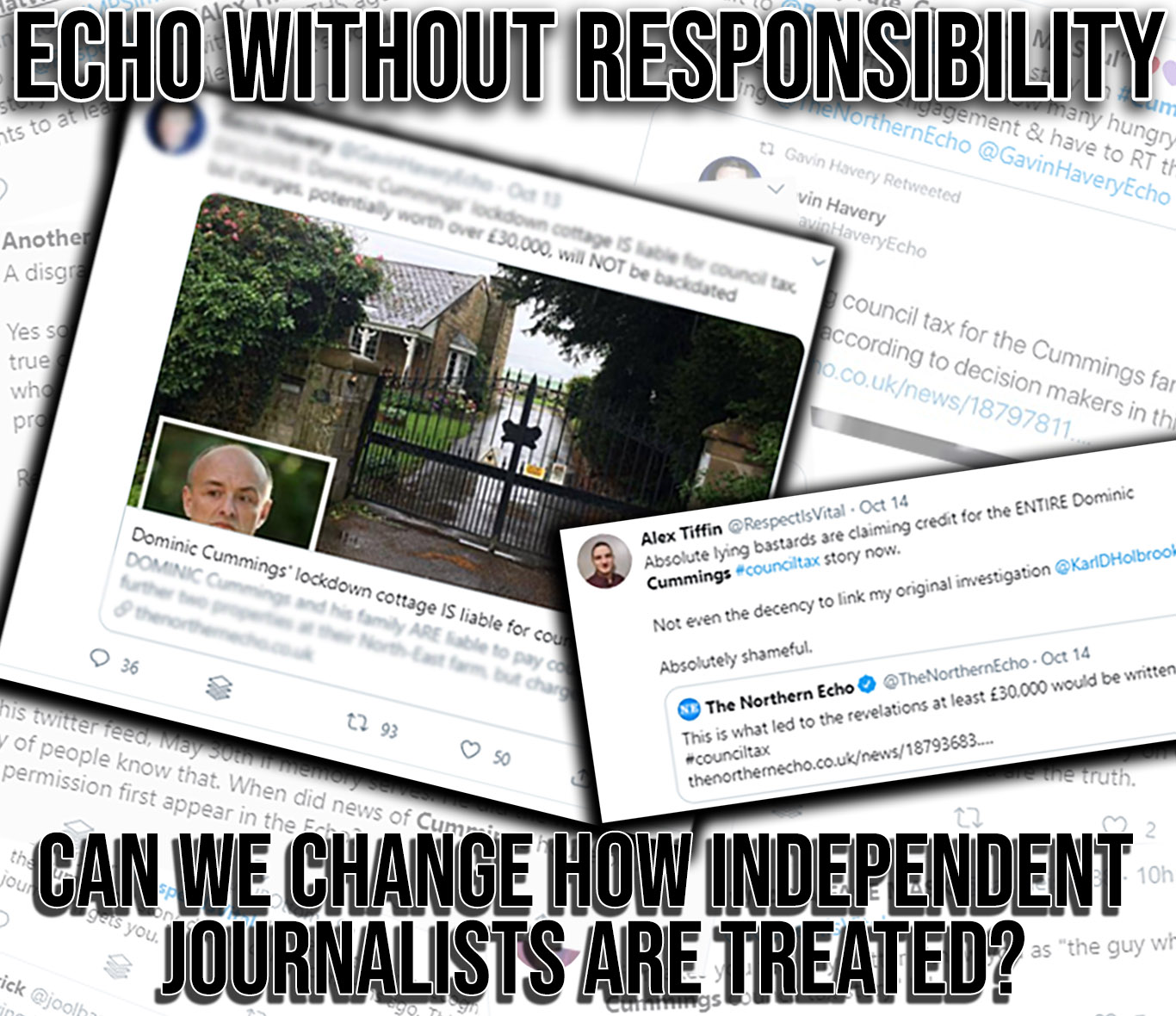 This article started as a defence of Alex Tiffin, but as things progressed a lot of old wounds opened. This article looks at the Northern Echo’s recent treatment of fellow independent journalist Alex Tiffin, and how many important political stories are overlooked by the people who should be reporting them.

Earlier this week I attended the Westminster Social Policy Forum seminar on The future for social security in England, specifically Universal Credit, COVID-19 and disabled claimants. I mention this as one of the events keynote speakers was fellow Journalist Alex Tiffin.

The WSPF event had nothing to do with journalism, but it was a learning experience. Alex is a solid journalist and a bloody hard worker. I knew that he lived with disabilities but I never knew or asked the scale of them. His story was humbling and a reminder that disability can only hold you back as much as you let it; And no matter how bad things can get, people can still produce amazing work!

However, Alex’s story, while humbling, was also uplifting. Like many others, I know how much good, and often important work he has achieved while fighting this uphill battle against disabilities and a system of ‘help’ which is stacked against him.

It is because of this experience at the WSPF that when I heard the Northern Echo had attempted to frame Alex’s hard work as their own, I apoplectic with rage.

I woke up on Wednesday morning, bleary-eyed, and started reading a DM from Alex. Initially (half asleep) I saw the name Dominic Cummings and thought it was an old message from June; but no, it was fresh! The date was the 14th of October!

This is hardcore journalism, This in my opinion is why journalism exists; to hold power and those within it to account.

As the day rolled on things took a dark turn. It surprised me to see the Dominic Cummings Council Tax story flooding my timeline via some very well-known journalists. However, it was NOT Alex Tiffin’s article they were sharing; It was his investigation, but written by someone else on the Northern Echo’s website!

Pictured above is the headline for the Northern Echo’s ‘EXCLUSIVE’ investigation by reporter Gavin Harvey.

One of the first things I learned about the Journalism trade (other than the need to find and report factual stories)’ was the advice that journalists should not attack other journalists. Sadly, this is a rule I must now break.

On this occasion, ‘Senior Reporter’ Gavin Harvey took MONTHS worth of Alex Tiffin’s hard work, wrote his own version of the Story, then labelled it an ‘exclusive’ piece of investigative journalism.

It is the claim of an ‘exclusive’ that really took the piss. This was not just a retelling of a story that has already been widely reported. Here, a ‘senior’ journalist and his editor chose to lie their readers. This was no exclusive and they had no right presenting it as such. (Even we wrote about this story before Northern Echo!)

The ONLY journalist who has the right to call the Dominic Cummings Council Tax story an exclusive is Alex Tiffin!

I wasn’t going to say much about Gavin Harvey, as in most cases the blame for stories and instances like this lies with the editorial teams. Editors should by their very nature be demanding sources from writers and ensuring the articles they publish are factual, to maintain journalistic integrity.

Sadly, while I would prefer to blame the editor, Gavin could be seen using social media to boast about and promote ‘his’ story. He is far from blameless.

The Echo’s editor Karl Holbrook allowed one of his SENIOR journalists to use someone else story, and importantly someone else’s research. The fact they wrote about the story shows they knew of Alex work, which begs the question of why?

Did they genuinly think this was an honest way to act, or did they just think Alex was so small that he couldn’t fight back?

There are people who despise Dominic Cummings and who avoid all instances of him; Something I can understand. Below is a gallery showing the headlines from Alex Tiffin’s investigation into Dominic Cummings from May / June and October. (Images from Alex’s website Black Isle Media.)

At this point, I was going to talk about the waves of Journalists who work within the mainstream bubble who flooded the Echo with praise for their ‘exclusive’. But on the whole, it’s not worth it. By the time this is released think most journalists will know what happened.

Instead, I will use this section to pass a message to the ‘bigger’, more esteemed journalists.

As I’ve already laboured, Alex’s story is not a new story; it was almost half a year old. But if that’s the case why is it so many esteemed mainstream ‘journalists’ did not know about the story?

The answer (something many may disagree with) is arrogance. Journalist snobbery is real and something I’ve faced numerous times for not sounding how they expect, not having a blue tick or not going to a fancier university. (Maybe I should tell them I went to RGU?).

Sadly, this is a common trope most independent journalist are faced. There are people in the industry who simply don’t think we should be raising our heads above the parapet; so when we do find a big story they SHOULD have broke, its framed as activism or discounted as an amateur blog. They ignore the years of learning and experience most independent journalists have, as the simple fact is they think we are below them.

A door closed is a story ignored and a journalist snubbed

It is this snobbery that leads to stories like Alex’s being ignored. This is a form of snobbery I have experienced first hand, and honestly, it almost broke me. In March/April (long before VB) I was reporting about the inconsistencies with the COVID-19 testing on my own. At that time, I discovered that government were misreporting the testing stats, and were being deceptive about the actual amount of people being tested.

My work was 100% sourced, properly researched and updated every day for weeks but no matter how hard I tried the work fell on deaf ears. I spoke to journalists I knew, people I didn’t know, everything I could do draw attention to the story or just get advice on how to release it, but every door got slammed on my face.

Worst of all, I was not particularly bothered about being named and was happy to pass everything I had to someone with more experience.

The frustrations of having a genuinly big story but having no one listening to me led to me becoming ill for a short period; In fact, it was the main reason I stopped me wasting time with a ‘personal’ website, as I started to think noone would ever take me seriously. Never had I felt so devalued and dehumanized. I felt like nothing.

The only saving grace to this story was that a month after I gave up on it, Piers Morgan came across the same statistical inconsistencies and made it his personal campaign, so at least on a personal level, I was validated, and the story got the attention i felt it needed. It is just a shame it came a month later than it could have.

On that, I think I have said all I can say on the matter. What the Northern Echo did with Alex tiffins hard work was disgusting.

As a journalist AND an editor, it is important to remember that no ‘story’ is sacred but a person’s hard work very much is. Any writer or journalist is free to use stories which we have written about just as we are free to write our take on what anyone else reports. What is important, just as important as it was in our Uni days, is sourcing your work! Credit where credit is due as they say, so always add references!

And please, to those bigger fish, the ones with the sway and the infinitely bigger wage packets than us small fry – Remember we are mostly all in this for the same reasons, and blue ticks are not a signifier of journalistic integrity.

All we ask for is a chance.

Oct 21, 2020 VoiceBritAdmin
%d bloggers like this:
We use cookies to ensure that we give you the best experience on our website. If you continue to use this site we will assume that you are happy with it.Ok