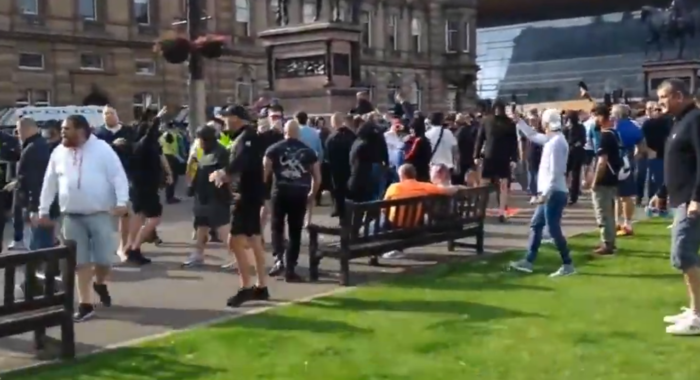 The Glasgow No Evictions Campaign had arranged todays march to raise awareness for the “for safe accommodation for asylum seeker”. Later in the afternoon, the Glasgow No Evictions Campaign were forced to cancel the event. The GNEC campaign informed their supporters that the “far-right” were attempting to hijack their protest; the counter-protest alleged they were ‘defending the cenotaph’.

The counter-protestors claimed to be ‘patriots’ that were there to ‘guard statues’ against damage from Black Lives Matter protestors. As events progressed, far-right protestors arrived and events turned ugly leading to protestors being attacked. Police began to make arrests.

As the footage shows, hundreds of police, some in riot gear arrived on the scene; dividing George Square and keeping the Counter-protestors from those who had turned up to march with the ‘Glasgow No Evictions Campaign’.

Police had to form a human shield to provide peaceful protestors, and the supporters of the march, safe exit from central Glasgow. Peaceful protestors were escorted to safety by police while thugs sang “Rule Britannia”.

Ironically, Glasgow has never reported any threats to any of their statues or war memorials; with Glasgow’s most well-known statue being famous for being in a vandalised state most of the time.

Voice Britannia has reached out to people on all sides of what happened this evening for comment. If you witnessed what happened, contact us via email at info@voicebritannia.co.uk or on Whatsapp 07752973742

We have spoken with Glasgow No Evictions Campaign who will be releasing a statement to Voice Britannia in the coming hours.