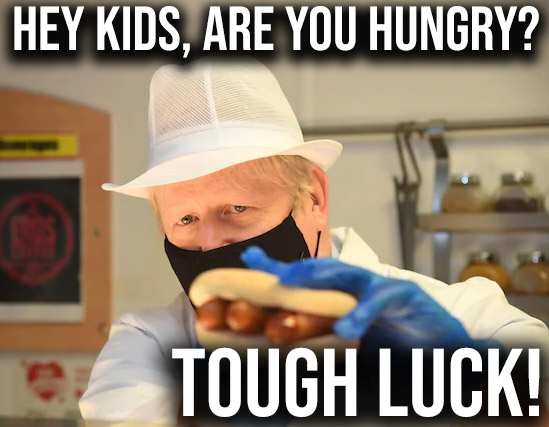 On Monday. Prime Minister Boris Johnson claimed children will not go hungry as ‘a result of any Government inattention’ – While children in England were now literally going hungry due to his inaction.

Let them eat NOTHING!

Last week, The Tory Government voted against spending £20 Million to provide free meals to children during the October break. A rise in COVID-19 unemployment; and a drop in wages due to furlough, is expected to see a large rise in families requiring food-assistance.

Today, the PM told reporters  “I totally understand the issue”, but, he went on to claim “the debate is how you deal with it”; Ignoring the obvious £20 million solution presented to him by Labour politicians last week.

Boris Johnson told reporters “We don’t want to see children going hungry this winter, this Christmas, certainly not as a result of any inattention by this Government – and you are not going to see that.”

The Prime Ministers words are being seen as an empty statement. Experts were quick to point out that his government voted NOT to feed hungry children last week.

Rashford to the rescue!

Embaressingly, the PM was forced to admit he lied about speaking with footballer Marcus Rashford. Rashford had earlier responded to journalists reporting that the PM had spoken to him. The England footballer pointed out that the last time they had spoken was in JUNE!

In a fumbling explanation, Boris Johnson said: “What he (Rashford) is doing is terrific.”

Government are sticking to their guns on the free meals campaign. Yesterday, one of the Tory parties chief propagandists, Brandon Lewis, went on TV to defended governments refusal to feed children.

Lewis defended government by claiming more funding was given to local councils; however these claims fell on deaf ears. It was pointed out that the additional funding was for general hardships, not providing additional meals over school holidays.

The longer this debate goes on the worse every member of the Conservative party looks. It is impossible to spin the decision not to feed children into something positive.