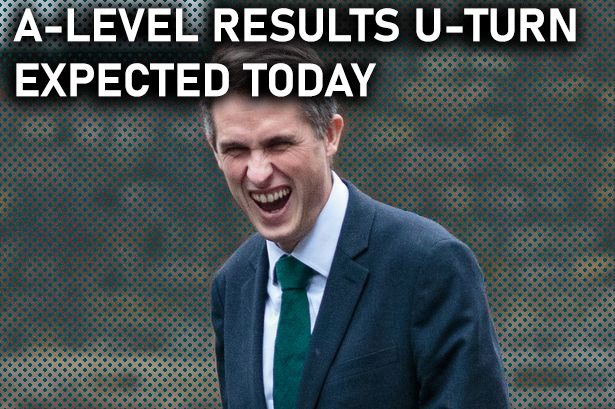 UPDATE: Gavin Williamson is dragging Government into yet ANOTHER embarrassing U-turn over the English A-Level results fiasco.

It is expected that Government is to make a statement around 4 pm today to announce the latest U-turn. It is believed that England will adopt the same ‘teacher assessed grades’ policy which was used by the Scottish government.

Voice Britannia has found that members of the ‘Office of Qualifications and Examinations Regulation’ is now pushing to abandon the ‘algorithm’ which was used to grade students.

While Gavin Williamson is said to be ‘digging his heels in’ on the matter, defending the shambolic algorithm and refusing to u-turn, the matter is said to being ‘take out of his hands’.

Department of Education sources told VB that the belief is now that government are essentially backed into a corner, with it being ‘politically untenable’ for any ministers to continue to defend the algorithm; yet Williamson is said to be ‘staking his career on this’, doubling down on the mess which has been made to try and protect his ministerial future.

The war between OFQUAL and Gavin Williamson came to a head-on Saturday when OFQUAL published their guidance on how students can appeal against the grades they have been given. The government were reported to be ‘furious’ at the publishing of OFQUAL’s advice due to it undermining their “exam-triple-lock” promice.

Sources are indicating that Gavin Williamson or one of his ministers are to make a statement and some sort of U-turn on the A-Level grades fiascos at some point afternoon.

While a U-turn on the A-Level results is now expected, what many students, teachers and parents want is answers; solutions; and the resignation of Gavin Williamson and whoever in OFUAL is to blame for this mess!

Will Gavin Williamson be the Education Secretary this evening?

If you would like to help Voice Britannia grow, stay tuned for our crowdfunding drive which will be coming soon, or donate to us via Paypal, and help us grow and take on the mainstream!
(CLICK THE BUTTON)