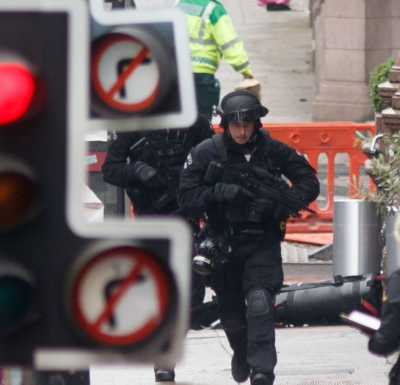 A Sudanese man was shot and killed by police after going on a stabbing rampage in Glasgow’s Park Inn Hotel. Police declared a major incident at 1250pm Friday afternoon following the horrific multiple-stabbing which left 6 injured, including a police officer David Whyte, 42.

What we now know about the Glasgow attack

(These facts have been corroborated by VB’s independent source.)

Sky News reports that staff of the Park Inn Hotel were warned by residents of the attackers deteriorating mental condition in the days leading to the attack; other Sudanese residents had become scared of his erratic behaviour. It is believed the man had lately become angrier with his living conditions; specifically with noise levels within the hotel.

A mental health emergency was developing.

VB sources confirmed the other Sudanese asylum seekers had reported their concerns about the man’s behaviour to a liaison team in Glasgow. The liaison team had been on contact with hotel staff the previous evening to warn them of the growing mental health concern.

In the hours before the attack (11 am), the man had been in a conference call with an immigration lawyer and a Sudanese man who had previously reported concerns about the man mental health to staff. The call concluded with the lawyer saying he would pass the concerns to a “safeguarding team at the Home Office”; However, little over an hour later, the Sudanese man went on a violent stabbing rampage in the city centre hotel.

The male attacker was shot and killed by armed police at the Park Inn hotel on Glasgow’s West George Street. Police officer David Whyte (42) and 6 members of the public, aged 17, 18, 20, 38 and 53, were rushed for ’emergency surgery’ in a Glasgow Hospital. The conditions of the 5 other victims have not been released.

Sources told VB the man, who was living at the Park Inn, began stabbing people in the building, before exiting the Hotel. The Sudanese attacker then went back into the Park Inn, where he was confronted by a uniformed officer; first responder David Whyte.

The attacker was able to stab the officer (Whyte) before re-entering the hotel. Armed police arrived on the scene within 2 minutes. Police quickly chased down and cornered the attacker within the hotel. The Sudanese man was shot and killed by the armed police.

It is believed that the incident was related to the attackers deteriorating mental health and reported ‘poor’ living condition; Police have reiterated they do not believe the attack to be terror-related.

Police Scotland are now appealing to speak to anyone who had been in contact with the Sudanese attacker in the days leading up to the attack. Police state the incident was ‘quickly contained’ and there is no risk to the public.