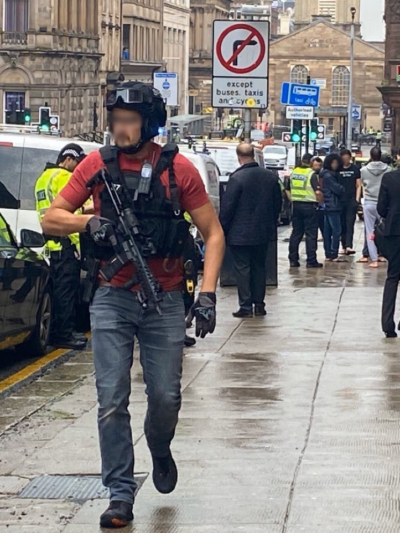 Badreddin Abedlla Adam, 28, was shot and killed by police after going on a stabbing rampage in Glasgow’s Park Inn Hotel. Police declared a major incident at 1250pm Friday afternoon following the horrific multiple-stabbing which left 6 injured, including a police officer David Whyte, 42.

Staff at the hotel had been warned of Badreddin Abedlla Adam’s deteriorating mental health condition. Residents at the Park Inn hotel reported the man’s erratic behaviour and fears for their own safety to representatives at ‘Mears‘; who had housed the asylum-seekers at the hotel.

Hotel resident, Siraj‘ told Sky News that Badreddin Abedlla Adam had told him “Everyone here in the hotel is against me”; prompting him to contact Mears. A representative from Mears housing is believed to have spoken to Abedlla Adam on Friday morning in attempts to resolve the situation.

When the COVID19 lockdown came into effect as many as 380 refugees and asylum seekers were moved by private housing provider ‘Mears’, from wherever they were staying and put them into 6 hotels in Glasgow city centre.

Glasgow South West MP, Chris Stephen, told The Guardian “There needs to be immediate clarity on who was placed in the hotels and what assessment, if any, was carried out”.

Earlier this week, Mears responded to the allegations of the asylum-seekers poor living conditions, with many of them being forced to stay in city centre hotels. Mears chief executive, John Taylor told the press “anyone living in a hotel for three months is going to find that challenging”; However, Taylor stopped short at recognising complaints about ‘mouldy food’.

In the hours before the attack (11 am), the man had been in a conference call with an immigration lawyer and a Sudanese man who had previously reported concerns about the man mental health to staff. The call concluded with the lawyer saying he would pass the concerns to a “safeguarding team at the Home Office”; However, little over an hour later, the Sudanese man went on a violent stabbing rampage in the city centre hotel.

Glasgow Central MP, Alison Thewliss said “People should never have been in hotels in the first place. I see people all the time at surgeries who are really vulnerable and understandably struggling, and the Home Office makes that worse all the time.

“To be moved around by their accommodation provider during a pandemic left people isolated and unable to access their support networks. The stress of this cumulative to what else they had experienced made it very difficult.”

Police Officer David Whyte who was attacked has told the press “As the first responders on scene, myself and my colleague did what all police officers are trained for to save lives” and that the incident as “something I will never forget”.