Government award £108 Million ‘PPE’ contract to a company who specialise in Coffee and Nut! 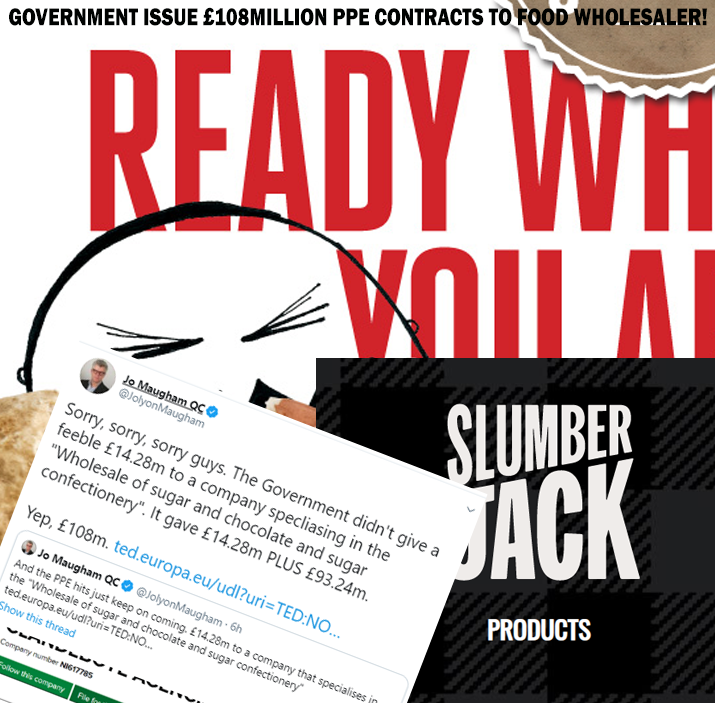 The revelation that Government has awarded PPE contracts worth ‘£108 MILLION’ to a company in Northern Ireland who officially specialise in sales of coffee and Nuts was uncovered by Jo Maugham QC yesterday.

Maugham, director of the ‘Good Law Project’ is more known for his legal interventions on Brexit; however, now Maugham is raising serious questions about the Governments post-Brexit procurement procedures.

Maugham’s analysis of contracts awarded by Government in recent months has uncovered a trove of businesses which have all been awarded huge amounts of money for their services. This list includes the unforgettable ‘Seaborne Freight’ which was awarded part of a £108Million contract to run the UK’s “no-deal Brexit supply ships”; Seaborne Freight had no ships and the incident was labelled (incorrectly?) as a Chris Grayling related mixup.

When looking at Clandeboye Agencies Ltd and their usual business operation, questions arise on how Clandeboye, a company whose usual business enterprises specialise in the wholesale of snack nuts (crunchcraving.com), and the wholesale of coffee-related products (slumberjackcoffee.com); were awarded hundreds of millions of Government funds to supply Hospitals with PPE?

Searching the companies history shows the companies (publically) as being firmly rooted within the Food and Drinks industry; The company has no history that Voice Britannia can find in regards to the supply of PPE. When looking at the ownership of Clandeboye Agencies Ltd, links were identified between Clandeboye and 2 other companies, Anchor Fixings Ltd and Clady Holdings Ltd.

Clady Holdings Ltd is a company which was created on the 8th June 2020 and has no record. The other company, Anchor Fixings Ltd, appears to run a wholesale industrial goods busiess, although there is no indication that Anchor Fixings Ltd would have anything to do with the filfilment of the Government contract.

This contract, while seemingly above-board, raises yet more questions on the Governments lack of due diligence when spending huge amounts of Government money, with the tendering of many contracts seeming to be rushed, or given to preferential businesses. While Pandemics and other serious incidents are national emergencies, the stream of money Government can issue is not infinite.

Earlier this month openDemocracy forced Government to release information on contracts which have been issued to the companies Amazon, Microsoft, Google; and the controversial Faculty and Palantir, who have direct links to Dominic Cummings, ‘Vote Leave’ and the infamous Cambridge Analytica.

Within this dossier, it was found that Faculty received over £1 Million to create the botched ‘NHSX’ track-and-trace. In recent days (VB reported) the House of Lords Health Minister Lord Bethell revealed to the Lords that the building of Faculty’s APP has ballooned to costing the public nearly £12 Million pounds!

It is clear that in a time of emergency some decisions may need to be made quickly; however, it looks like the Governments of both Theresa May, and now Boris Johnson may not be paying close enough attention to the ability of the companies they are awarding these huge contracts to.

At a time where many are losing their jobs, and Government claim to only have so much money to spend helping society, many will rightfully ask what checks and balances are Government using before handing out these contracts, many involving amounts of money we can only dream of (yet never have).

(To Give people an idea of the amounts we are talking about, the £12million reportedly spend on the failed NHSX app would be able to pay someone £30,000 per year, for 400 YEARS!)