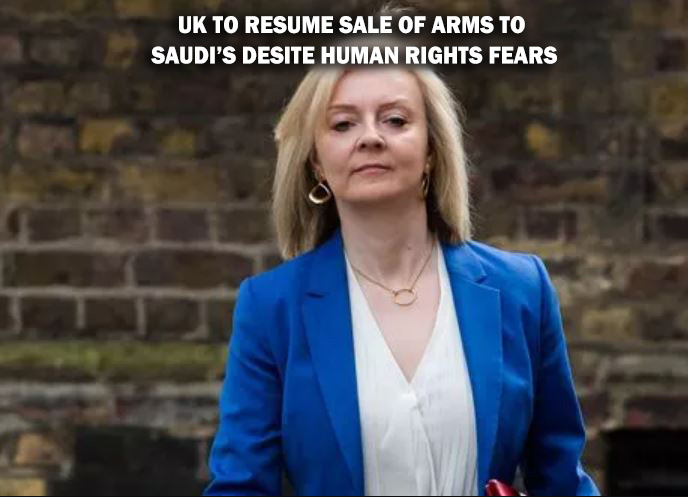 International trade secretary Liz Truss told media that while “credible incidents of concern” related to Saudi forces’ had been classified as “possible” breaches of international law; government viewed these as “isolated incidents” and would start issuing arms export licensing again.

The announced has suprised many, coming less than 24 hours after foreign secretary Dominic Raab announced a range of ‘asset freezes and ‘travel bans’ against individuals from Russia, North Korea and Saudi Arabia due to human rights abuses.

UK Government was forced to stop issuing export licences for arms going to Saudi Arabia in June 2019, after the Court of Appeal ruled Government was ‘acting unlawfully’ by allowing the sale of British-made arms to the Saudi’s for use in Yemen before properly ensuring they would not be used in breaches of international law.

Since the bombing of Yemen began in March 2015, the UK has licensed £5.3 billion worth of arms to the Saudi regime, including:

In reality, the figures are likely to be a great deal higher, with most bombs and missiles being licensed via the opaque and secretive Open Licence system.

Before the Court of Appeal intervention, British arms manufacturers Raytheon UK and BAE systems were said to be instrumental in the supply and operation of British arms and aircraft to Saudi Arabia. Arms which were made by British companies for the Saudi war in Yemen included the ‘Paveway bombs’, ‘Brimstone missiles’ and the terrifying ‘Storm Shadow cruise missiles’.

In a statement released today, Andrew Smith of Campaign Against Arms Trade said: “This is a disgraceful and morally bankrupt decision. The Saudi-led bombardment of Yemen has created the world’s worst humanitarian crisis, and the government itself admits that UK-made arms have played a central role on the bombing. We will be considering this new decision with our lawyers, and will be exploring all options available to challenge it.

“This exposes the rank hypocrisy at the heart of UK foreign policy. Only yesterday the government was talking about the need to sanction human rights abusers, but now it has shown that it will do everything it can to continue arming and supporting one of the most brutal dictatorships in the world.”.

What do YOU think about this story? Should the UK be selling arms to Saudi Arabia for use in the Yemen war?