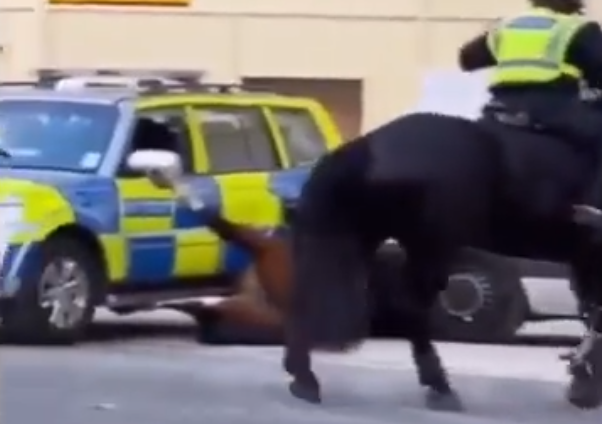 A Bizzare and equally tragic video has appeared on social media showing a police horse which appears to have been run over by a police car. The horse is thought to have died at the scene, although Voice Britannia has received conflicting reports on this.

Since we published this story, we have had quite a few counterclaims to what we had seen and been told. We are awaiting further confirmation from the police. News relies on witnesses so if you saw something please get in touch with Voice Britannia.

The video, originally uploaded by ‘World Star Hip Hop‘, shows a police horse lying motionless under a police vehicle. The Volvo estate police car which was seen on the horse is driven by traffic police officers.

Witnesses to the incident claim the ‘police ran over the horse’; although, we can not confirm this from the video. The incident happened during the weekend of protests in London 2 weeks ago. It is not known if the incident was related to the Black Lives Matter protests.