How much PPE did the UK need? Did the UK need to spend hundreds of millions on private PPE procurement contracts? (Part 2). 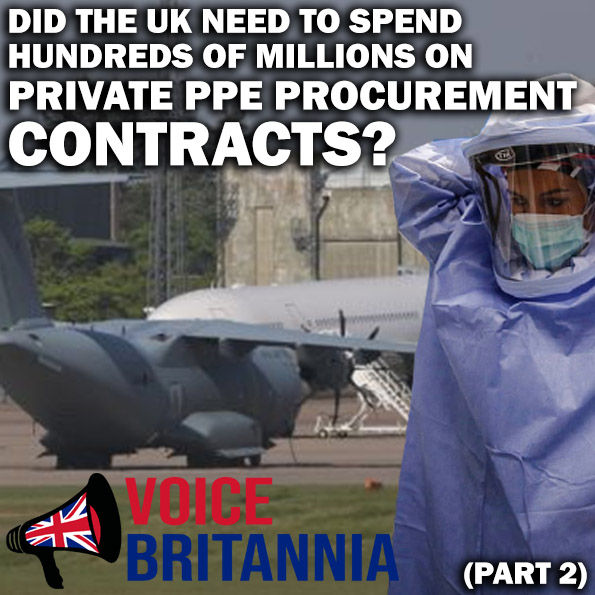 This is part 2 of Steve Smith’s detective work on the UK governments response to COVID-19, specifically on PPE, its procurement, how much was bought, how much was used; In the hope of finding out if we really needed to spend £100’s of millions on contracts to private companies for PPE.

Part 1 of this saga is the ‘Clandeboye Agencies LTD’ story from around a month ago – Read it here!

This topic is also being investigated by many other great minds, like Peter Jukes of Byline times, and QC Jo Maugham of the Good Law Project. If this topic interests you then find and follow those two on Twitter, and prepare to be sucked into the rabbit hole of private procurement of PPE!

Byline times have ALOT more on this story! Check them out!

The last time I put a finger to keyboard to write about this topic (as ‘news desk’ for VB) the article was about ‘Clandeboye Agencies Ltd’ and the £108 MILLION contract they had won from the UK Government, to supply ‘PPE’. Of course, the Clandeboye contract was not the only one of these odd PPE procurement deals – with the UK government issuing another £108 Million PPE contract, to a company called ‘PestFix’, who specialise in pest control!

While it is easy to get distracted by the HUGE monetary numbers which are being thrown around, something was bugging me. We had no way of knowing how much PPE was actually needed, how much PPE was used, how much the UK has spent on PPE and whether these huge private contracts for PPE were even needed?

The first question I wanted an answer for was how much PPE government has bought directly and not through private procurement contracts. For the longest time, I thought it would be impossible to find the answer to until long after the pandemic, as FOI’s and emails to DHSC had all failed, but alas I was wrong.

The evidence on how much PPE Government had procured, with the bonus of the amount which was spent, fell into our laps from the strangest of sources, the Governments defence committee sitting on the 6th July. At this meeting, sir General Nick Carter faced a barrage of questions from ministers on the procurement of military hardware. What caught my attention was an off-the-cuff remark which formed part of Sir Nick defence of his department.

“What I would say, and you may think what on earth is he raising this for, but the defence equipment and support area is often a poor vote in terms of its reputation, but this is an organisation which mobilised remarkably for the COVID response, and on Friday, one week ago, they passed their 10 BILLIONTH procurement of individual items of PPE; and they have spent 5 BILLION pounds in doing this for Government.”

While everyone was talking about (laughing at) wee Mark’s Frannie’s threats towards the army, Sir Nicks comments on PPE procurement seems to have flown under the radar. General Carter clearly stated that as of the 3rd of July the Army has procured 10 BILLION items of PPE for the British Government at a cost of 5 BILLION Pounds. This, to my knowledge, is the only indication of how much PPE Government have actually bought and how much it cost.

Screen breaks are a great thing! When was the last time you had one? This page will always be here, so take a break! (You have earned it!).

So, now we know the Government has managed to physically procure 10 BILLION items of PPE, and that government had to spend £5 Billion on this massive procurement of PPE. Now we have an amount of PPE procured and what it cost, my thoughts moved to the question of “how much PPE has the UK actually used during the Pandemic”? The answer to this question (surprisingly) came directly from the Department of Health and Social Care!

We are told that over 2 BILLION (2,227,679,000) individual items of PPE have been distributed through England in the 131 days since the counting has begun. This equates to an average of around 17,005,183 items of PPE being used daily. The statement from Sir Nick also gives us a ballpark figure on cost. We know that on average an item of PPE costs Government around £0.50p, so we only need to divide the amount of PPE by 2 to get an approximate cost.

Using this Heath-Robinson-esque method of calculation, it would mean that the Government is spending around £8.5 Million PER-DAY on PPE. We can also use this to work out how many days worth of PPE £108 Million would buy; using the figures Sir Nick mentioned this would be enough to supply PPE for around 12 days.

We do not currently know is how much PPE stocks Government had going into the Pandemic, or how much they would have used during normal operation.

So, in conclusion, what the hell does any of this mean! Well, for one, take what Sir Nick said, that the Army procured 10 BILLION bits of PPE for Government; and Government have told us that 2.22 BILLION items of PPE were used; Does this mean that somewhere in England there are warehouses storing the 7,772,321,000 individual items of PPE that were procured by Government?

This revelation also brings the contracts which were issued to Clandeboye Agencies and Pestfix into question. What exactly were they for, why were they selected and have the delivered any PPE? My initial suspicions on the private procurement contracts were that they were to cover an emergency shortfall; however, the date when Clandeboy’s larger contract was awarded, was in the middle of May after the initial panic linked to the PPE shortages.

Slowly, but surely, more evidence continues to come from Government on the deals which were done to supply the PPE which was required to protect the healthcare professionals ‘on the front-lines’.

The fact the Army procured 10 BILLION items of PPE since they were asked to assist with the distribution of PPE on the 18th of March up into the 3rd July (107 days) also brings into question the need for any of the additional PPE contracts when the Army was procuring on average 93,457,943 items of PPE, PER DAY?

Did we really need to pay all that money to Clandeboye and PestFix when we were developing this monumental PPE stockpile; and why have government not said more about the 10 BILLION items of PPE the army procured? Let’s hope we get some answers as a tiny bit of transparency on this issue would lead to most questions being quickly answered.

I would like to think that ‘part 3’ of this investigation will be the final chapter; However, the way things are going now, it would be more prudent to create a site solely for this topic!

Thanks for sticking with it! This is a much longer read than the majority of VB’s articles, and contains a lot more data, so well done if you stuck with it! Remember and tell us what you think!