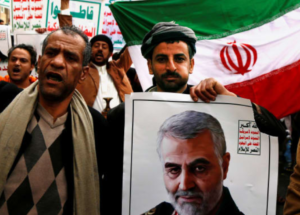 Iran has issued a warrant for the arrest of President Donald J. Trump, and more than 30 is staff, following the killing of General Qasem Soleimani earlier this year.

Tehran prosecutor Ali Alqasimehr said that Trump stands accused of “murder and terrorism charges” after General Soleimani was assassinated by an American drone strike. The attack happened outside Baghdad airport in January 2020.

In January, following the killing, Trump defended the killing of General Soleimani by claiming he “was planning a big attack”; and that “he was a monster. And he’s no longer a monster. He’s dead“.

“Qasem Soleimani was an Iranian major general in the Islamic Revolutionary Guard Corps (IRGC) and, from 1998 until his death in 2020, commander of its Quds Force.” (source).

Aljazeera also reported that that Iranian officials have asked Interpol to help in the detainment, and extradition of President Trump and the other wanted individuals. Interpol has not made any statement on the matter.

If Trump and his team were detained by Iran, they would face trial for murder and terrorism and if found guilty could face capital punishment; which could include the death penalty.

No statement has been made by Donald J Trump on the issue.