Is President Donald Trump losing his mind? 5 examples of his recent mental decline 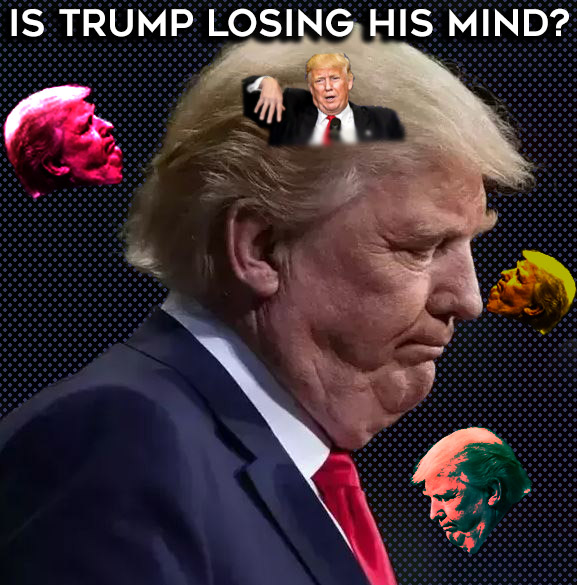 Many question the mental health of President Donald Trump. The last year has produced tons of examples that show Donald Trump acting even more irrational than he did before. Let’s have a look at the things he did this year that suggest he might be losing his mind.

It should come as no surprise that someone with no morals like Trump would call veterans losers and suckers. People may claim that this all came from anonymous sources, but here’s the truth in the matter. What do we know about Trump that showed his character in the past?

Trump has held a consistent character of being a bully throughout his presidency, which shows that it wouldn’t be a stretch to say that he thought of those in the military as both losers and suckers. In addition, as we have seen in the past, Trump’s loyalty even to news sources only stretches as far as their loyalty to him.

When Fox went out of line and reported on the polls that showed him losing, President Trump attacked them as a poor news source, despite having previously praised them.

#2: Suggesting a Lack of Testing for COVID-19 will Make It Go Away

We have a smart president. At least, that’s how he’d like to think of himself in his imagination. One of the things that displayed his tendencies as a dictator was to tell the media that if we stopped testing for COVID-19, the problem would simply go away. That made the news with world governments around the world such as in the Philippines, Brazil and Italy as our president seems to have a mean streak as a wanna-be dictator. Luckily, enough people in the United States are hip to his plans.

Throughout the COVID-19 pandemic, Trump has fought against the experts. He has attacked anyone who believes in wearing masks, which may have caused the problem to explode across the United States. The United States has seen 6.29 million cases across the nation because of poor leadership.

One of the first big controversies that the president made came when he talked about how injecting disinfectants like bleach might help to fight the COVID-19 pandemic. Now, some people might see this as a harmless joke, but when you have a platform as big as the president, you could be speaking to hundreds of thousands of potentially vulnerable people who take this advice with seriousness. That could lead to deaths, and our president doesn’t seem to care that this will have a negative impact.

Especially when you sit in a position of power like the president does, he has a responsibility to act with dignity and compassion. Since the presidential campaign began in 2016, we have seen neither dignity nor compassion from this shameful individual.

He has gotten into some of the most trivial verbal spars over things that shouldn’t matter as a president. Trump crazy has taken on a new meaning, however, in 2020 as his insanity seems to grow with time.

#4: Wanting to Delay the Elections

Perhaps one of the things that should alarm Americans across the country, when the president of the United States suggested that we delay the elections, we should have seen far more outrage than what we did. This tactic gets used by dictators across the world as they have delayed elections for superficial reasons to try to prop themselves up and stay in power.

Luckily, the president hasn’t accumulated enough power to have the power to delay the elections. Still, as Americans, we should be concerned about what this could mean. We can’t allow Trump to have this type of power unchecked. The problem is that we have a certain portion of the population that wants to give that power to him or they ignore these things with him. The fact that his ego makes him think he can do this should show his insanity.

Trump crazy is a special kind of crazy that lets him get away with saying the most shameful things. When George Floyd died, the president claims that he didn’t know the racially charged history behind the saying that he made, “When the looting starts, the shooting starts.”

Most people would find that doubtful, however. Miami police Chief Walter Headley first used this phrase in 1967. The police chief had an extensive history of bigotry. Going even further back, the saying may have come from Eugene “Bull” Connor, someone who was a famous segregationist.

One thing about Trump, he has remained consistently crazy throughout his time as president.

The fact that he won the election should scare the pants off anyone because his platform has always been centred on hatred, bullying and division. That’s not the message we want to have in America, and hopefully, we will see the last of him after this US election.

Donate and help Voice Britannia continue to post free news every single day. Everyone deserves to be in the know!