Keir Starmer: Selling Out The Left For A Sniff Of Power? 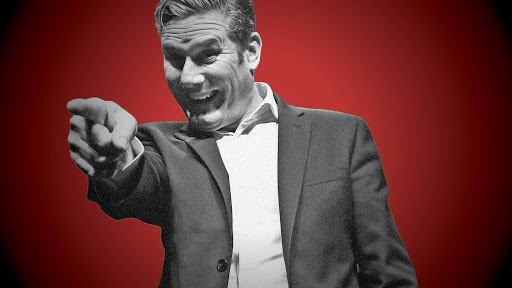 Keir Starmer – Is He An Absolute Sell Out?

I ask this as a question. I think I know the answer, and I think you might have a strong opinion, one way or the other.

Now let’s be clear. Nobody was expecting the knight of the realm to pick up where Jeremy Corbyn left off.

Corbyn was a one-off. His vision was unique in modern British politics, and while this was one of his greatest assets to his supporters, his opponents felt threatened by his progressive solutions to many of the problems we see when we open our front doors. Rough sleeping, foodbanks, poverty – Corbyn was a man with a plan, and while he may no longer lead the Labour Party, his vision was the spark that lit the fire, and that fire cannot and will not burn out.

This isn’t the end, and it’s not a beginning. The struggle existed long before any of us were born.

Government is simply a permanent rotation of the elite. They have a conveyor belt of privilege and ineptitude, ready to serve the 1%, whether the rosette is red, or blue.

I’m certainly not casting aside the achievements of past governments, including that of Tony Blair, it’s all on record, but let’s be honest, they didn’t answer to the people, they answered to shady donors and corporations. And if I say “Tony Blair”, you say “Iraq”.

So where did Starmer go so tragically wrong? You heard the stories of his working class credentials, his normal parents wanting the best for their normal son, and in his defence, we aren’t talking Old Etonian privilege, far from that.

Starmer had to earn his place in the establishment, and he did just that.

But in reality, he had an education that 99% of us can’t even begin to imagine. This isn’t his fault, of course, his parents wanted the best for their son, but if anyone was sucked in by the thought of the former Director of Public Prosecutions growing up in the same way as they did – such as necking a bottle of 20/20 down the park at the age of 15, or hiding 10 Lambert and Butler and a box of matches in a hedge near your home so your parents don’t find them – then I’m afraid you’ve got the wrong 19th leader of the Labour Party. That’s the 19th white, male leader of the Labour Party.

In his victory statement, Starmer said:

“Whether you voted for me or not, I will represent you, I will listen to you and I will bring our party together.”

Was you actually fooled by this hogwash?

Did you really think Sir Keir was interested in bringing the Party together? He seems more interested in keeping the government together, and has utterly abandoned any thoughts of building bridges with a huge left-wing party membership.

Was the callous sacking of Rebecca Long-Bailey an example of bringing the Party together? As Chris Williamson said to me in the recent interview I had with the former Labour MP:

“This was a blatantly factional decision and a clear indication of the direction of travel that Starmer is taking the party.”

“I’m very concerned at what I see as disproportionate action against one of the most talented loyal female members of Parliament in the commons. Rebecca Long-Bailey could have been leader of the party under different circumstances.”

He also accused Keir Starmer of carrying out a “purge of left wing members” and breaking a promise to unify the party.

The promised unity has delivered no left-wing socialists in the Shadow Cabinet, and top jobs for Blairites. He has appointed political mishaps such as Wes Streeting and Jess Phillips to positions way beyond their very limited abilities. Both of them are paper clip auditors at best.

A huge number of genuine left-wing socialists lent their vote to Keir Starmer. Will they have the guts to admit they got it dreadfully wrong? Probably not.

Despite claims of a growing membership, the party has seen an exodus of black members, and membership is falling 2,000 every week under the leadership of Keir Starmer.

Starmer’s inability to deal with horrific allegations of racism in the Labour Party is deeply embarrassing. His failure to address the rampant racist bullying of black Labour MPs, including Diane Abbott, Dawn Butler and Clive Lewis, is the damning reality that proves all racism is off Labour’s agenda.

You simply cannot be a selective anti-racist, Sir Keir.

Learn from Corbyn, rather than besmirch him.

Then you find out you, the party members, will pay “substantial damages” to ‘whistleblowers’ who contributed to the widely-rebutted and much maligned Panorama antisemitism ‘expose’. Paying for Rachel ‘tougher than the Tories on benefits’ Reeves biscuits isn’t bad enough, you are now paying the very people renowned and documented for their hatred of Jeremy Corbyn.

Mr Corbyn said it was a political decision and not a legal decision, and I see no evidence to suggest he is wrong.

The Labour Party has been dragged to the centre ground under false pretences. Starmer’s campaign was utterly dishonest.

Starmer and his team have built a castle, be in no doubt of that, but the foundations are built on quicksand and the walls are made of glass. It will not last, because he has immediately bent over backwards for anyone opposed to left-wing ideology. The trouble is, he has bent a little too far, and it will come back to haunt him.

Starmer made lots of sweeping statements in his attempts to lure in the left-wing vote. And lots of good socialists got sucked in. I do not believe they voted for a pale imitation of the Tories. Do you remember the left-friendly ten pledges Starmer put together? I do. How’s that going then?

The red liberal elite, now led by Sir Keir, spent 5 years throwing punch after punch at Jeremy Corbyn. The Traducement of Jeremy Corbyn has left a stain on the soul of the Labour Party. Now they are supposed to be the “grown ups in the room”? Have a word with yourself. These disgraceful plotting nonentities were willing to destroy the Labour Party if it meant cleansing the party of Corbyn, his supporters and socialism.

Jeremy Corbyn deserves an apology from Starmer, not the removal of the whip.

Keir Starmer has been mostly supportive of the government’s handling of the coronavirus crisis. I wholeheartedly disagree with his support. The government’s failure is on record for the entire world to see. I don’t need to list the damning and ultimately devastating statistics, because if you’re reading this, you’ll probably already know them.

If you put Sir Keir Starmer where he is now, and you are happy to trade your principles for a sniff of power, we probably won’t get on all of the time.

We had a sniff of power in 2017, but you lot intentionally campaigned against your own party, you wanted us to lose. You preferred Theresa May to Jeremy Corbyn and your nasty little worlds nearly caved in the night we saw Stephen Kinnock needing guidance and comforting from his wife, on live TV.

If you put Sir Keir Starmer where he is now, and you are honest enough to admit he has dragged the left to a place where it shouldn’t be, with characters at the top of the party that really shouldn’t be there, and ultimately, you made a genuine mistake, then fair bloody play to you.

Sir Keir promised the left we would be heard. Instead, they want to purge us, attack us, and silence us. Good luck with that.

A young Keir Starmer, once of the East Surrey Young Socialists, told Tony Benn that Labour should become “the united party of the oppressed.” In reality, Starmer has offered support to the oppressive Tory regime at the very moment he should be demanding government resignations. It’s as simple as that.

Starmer has sold out on hundreds of thousands of Labour Party members, and millions of voters who are desperate for a radical alternative to where we find ourselves now. Austerity and Coronavirus has left Britain broken, more than ever before.

Are Starmer and his band of centrist no-hopers the answer? Of course not.

Only time will tell if I am right or wrong, but at this moment in time, I can only see this heading one way, and it’s not a direction of travel you will be comfortable with.

Jeremy Corbyn shifted the entire debate leftwards, I mean look at the magic money trees the Tories have discovered since December 2018.

And if Keir Starmer assumes we are just going to disappear, say nothing, and watch them trash good people like Jeremy Corbyn, he really doesn’t know us at all.

I repeat Starmer’s words from his victory speech:

“Whether you voted for me or not, I will represent you, I will listen to you and I will bring our party together.”

Sir Keir Starmer sold out the left for personal advancement, and in my opinion, his words and actions since becoming leader of the Labour Party have been utterly disgraceful and absolutely unforgivable.

Competition rules:
*To enter, share this article on Twitter, making sure to use the #SwindonONSunday hashtag.
*ONLY tweets posted between 10 am and 7 PM on Sunday 2nd August will be included.
*We will give away 1 Voice Britannia Mug, and 3 sets of Voice Britannia stickers.
*Voice Britannia will pick winning tweets at random after 7 Pm on the 2nd august and contact the winners.
*COMPETITION CAN BE WITHDRAWN AT ANY TIME.