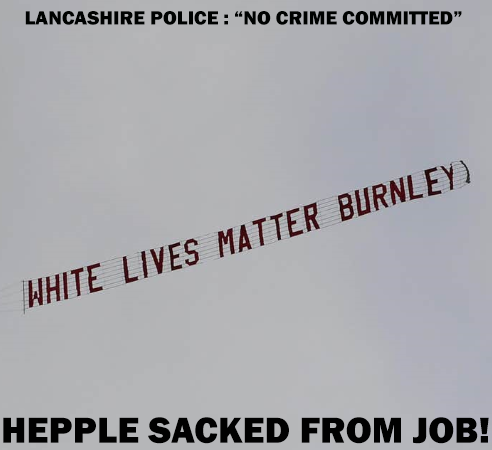 Colne resident and Tommy Robinson supporter Jake Hepple claimed responsibility for the stunt, telling his Facebook followers “I’d like to take this time to apologise… to absolutely f***ing nobody!” after claiming responsibility for the flying of a “white lives matter Burnley” banner above Manchester’s Etihad stadium during Monday evenings match.

UPDATE : Jake Hepples employer, engineering company Paradigm Precision has fired Hepple for his involvement in Mondays racially motivated stunt. Paradigm told media they “do not condone or tolerate racism in any form”.

Hepple and a group of far-right Burnley football supporters named “The Suicide Squad” are believed to have crowdfunded the banner flight and its ‘tone-deaf’ messaging. Since the incident, racist posts by Hepple and his partner have surfaced online; Hepple was found to be a supporter of the EDL; seen posing for an image with former EDL leader Tommy Robinson. Hepples partner has lost her job due to the backlash from the incident.

The company Air Ads setup and flew the banner. The Blackpool based firm has come under fire for its involvement. Blackpool Airport manager, Stephen Smith said “Blackpool Airport and Blackpool Council are outraged by this incident. We stand against racism of any kind and absolutely do not condone the activity. The message was offensive and the action reprehensible.“

Blackpool Airport has halted all ‘banner-towing activity’ with immediate effect.

Lancashire police’s Chief superintendent Russ Proctor said: “After assessing all the information available surrounding this incident we have concluded that there are no criminal offences that have been disclosed at this time”.

Following the incident, Burnley FC wrote “Burnley Football Club strongly condemns the actions of those responsible for the aircraft and offensive banner that flew over The Etihad Stadium on Monday evening. We wish to make it clear that those responsible are not welcome at Turf Moor”. Read Burnley FC’s full statement here.