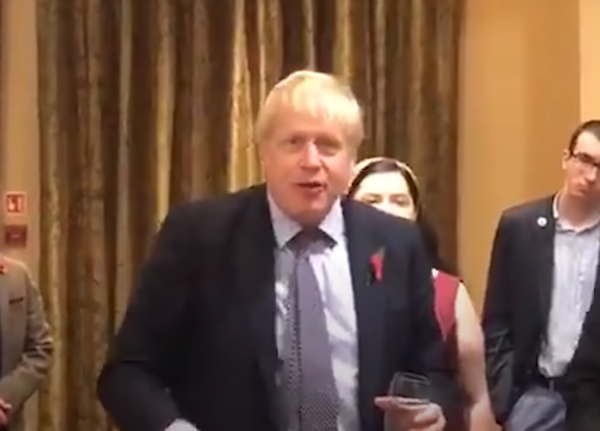 The “sensitive” documents, which were leaked to the Guardian, show that hauliers travelling between the UK and Northern Ireland will be forced to complete three sets of forms, which cover customs, security and transit (getting goods from one place to the other).

In the lead up to the 2019 election, Boris was forced to concede that a ‘soft-touch border’ would be needed between the isles; however, the leaked documents hint at a harsher border than the Prime Minister had promised.

Guardian reports the leaked HMRC documents detail the new systems which will come into use at the end of the year, Brexit deal or not.

Using a new ‘Goods vehicle movement service’, those transporting goods to NI will be forced to complete the three sets of forms, before starting their journey to NI.

The electronic forms will include an ‘import declaration’, a ‘safety and security declaration’ (that is not needed within the EU Single market) and a ‘Transit accompanying document’ (TAD) – that must stay with the vehicle at all times, so the EU can verify the goods that arrive in the EU zone are the same goods which left the UK.

The report states that HMRC plans to streamline the system so all elements can be rolled into one process; which can be submitted to authorities before travelling, creating a ‘goods movement reference’ that can be shown to ferry operators. While it is believed most trucks will make it through the border without any issues, others may be issued tariffs or have additional health and disease checks carried out if the goods are headed to the Republic of Ireland.

HMRC hope these new systems will impose as little burden on traders as possible; However, there are fears that the system may not be fully ready for whatever may happen on the 30th December. It is unknown if a no-deal Brexit outcome will have any impact on the new procedures but HMRC indicates this is it.

It is now more apparent than ever, that promises by government to avoid a soft-border round Northern Ireland or to keep NI in part within the Eu, all turned to dust. There is now, in an official sense, plans for a soft-border between the British Union members.

These new rules will only extend to goods travelling to Northern Ireland from the UK.