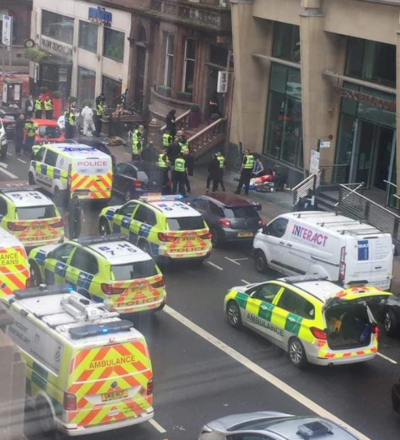 A Major incident was declared in Glasgow this afternoon, with reports of “multiple stabbings” being made. Three Fatalities have been confirmed. A Male attacker was shot dead by Armed police. Six people and a Police Officer are hospitalised and in a ‘critical condition’.

What we know … (facts only)

VIDEO FOOTAGE OF THE AFTERMATH

UPDATE: Sky News are reporting that the incident happened at the Park Inn hotel West George Street, Glasgow. Officers and paramedics in “hazmat” suits were spotted attending to people who appear to have been stabbed. There is currently large police and paramedic response underway.

Eye witness called Sky News. Louisa (across the street) saw the aftermath. She saw around 3 people on the ground, covered in blood. The people were taken away in Ambulances. The witness saw a group of people being told to come out of the Park Inn hotel with their hands up by Armed Police. Unconfirmed reports state that shots were heard but these were believed to be by Armed Police.

The Home Secretary, Priti Patel, has commented on the incident. Police have re-iterated that the incident is now ‘closed’. Currently, Police or Media have no confirmation whether this was a Terrorist incient, but it looks as if this is where the investigation is heading.