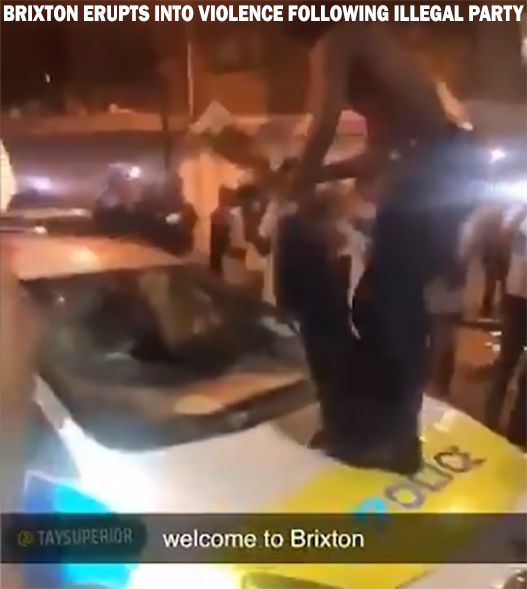 Violent scenes were captured in Brixton last night as the area erupted into violence following police closure of an illegal ‘street party’. The civil disobedience forced police to briefly retreat from the area, leaving police vehicles and property to be destroyed.

Met police reported that 15 officers were injured during the incident; 4 people were arrested for assault and public order offences.

Video footage from the incident shows groups of police in retreat from a man waving a large sword, before showing groups of youths smashing police cars.

The incident is reported to have been triggered as police were responding to an “illegal street party”. Police stated they attempted to make people leave the area, but the party-goers did not engage with the police.

Police were eventually broke the party up using a Dispersal order to force people to leave the area; the crowd remained and became hostile, leading to the violent scenes.

The crowd dispersed from the scene in the early hours of the morning. The Met police are now carrying out stop-and-search orders in the area “to protect violence”; although, it is difficult to see how a larger police presence and activity in Brixton cannot be seen as controversial.

There is a certain irony to this story. On the 8th of May, in the middle of the UK’s Coronavirus lockdown, thousands of middle-Englands more middle-class communities held ‘unlicenced’ street parties across England so many will rightfully ask why the majority-white English will be allowed to hold street-parties, but the majority Black communities in London can’t.