Mark Francois threatens Army: “Cummings will come down there and sort you out”. Who is running in the UK? 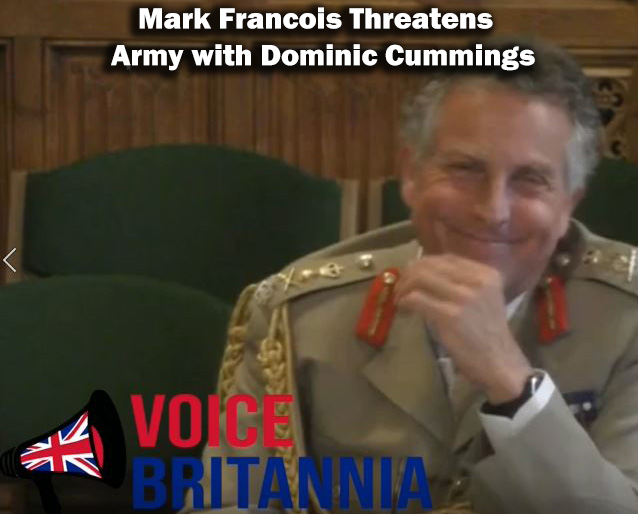 Mark Francois left many stunned yesterdays, after threatening the Army that if it does not reform ‘very quickly’, the unelected advisor Dominic Cummings is going to go to the army, and sort them out!

As Mark Francois was summing up his questions to Sir Carter, he decided to use his turn to issue a veiled threat to the Army, telling Sir Carter “we want to help.; unless you reform yourselves very quickly, someone is going to do the reforming for you.”.

Sir Carter did not disagree that reform was needed; However, he defended his department, telling ministers that during the COVID19 pandemic, the army had procured over 10 billion items of PPE, spending £5 Billion in the process. Sir Carter said “There is no other organ of government that was able to do that. They stepped up to the plate at extraordinary short notice.

“They have contributed massively to the nation’s challenge.”

A defiant Mark Francois did not seem to care about Sir Nicks answer, illustrated by the fact that Francois launched directly into his second “question”, which in reality was an angry rant about perceived failings of British army procurement over the last 30 years; before Francois used his second ‘question’ to turn his veiled threat into a very direct threat, telling General Carter “You are the professional head of the armed services. Please nip back to the department and ask them to sort their bloody selves out, or Cummings is going to come down there and sort you out his own way“.

General Carter awkwardly laughed off the interaction before, committee chair Tobias Elwood, also awkwardly, stated that he thought that message had been passed on.

Also discussed at the meeting, was the idea of creating an NHS reserve service so the country has available “surge capability” for any future public health crisis. Tobias Elwood also raised the idea of bringing back military National to solve the countries growing unemployment issues; However, General Carter discounted this idea commenting that there would be no work for the conscripts to IN the army.

Sources close to both Westminster and the Military have ridiculed the comments of Mark Francois, and the belief that the unelected Dominic Cummings seems to believe he has any power over the Army; With experts pointing at Cummings lack of security clearance as being a massive stumbling block in his path towards sorting anyone in the army out.

One of the more interesting takes from this session was not Mark Francois’s veiled or unveiled threats; It was the admission that the army has spend £5 Billion on PPE procurement, as UK Government as so far issued HUNDREDS of Billions worth of procurement contracts for PPE however, it is unclear where this PPE is.

Oct 28, 2020 news desk
%d bloggers like this:
We use cookies to ensure that we give you the best experience on our website. If you continue to use this site we will assume that you are happy with it.Ok