Meathead who urinated on PC Palmer memorial has been arrested. 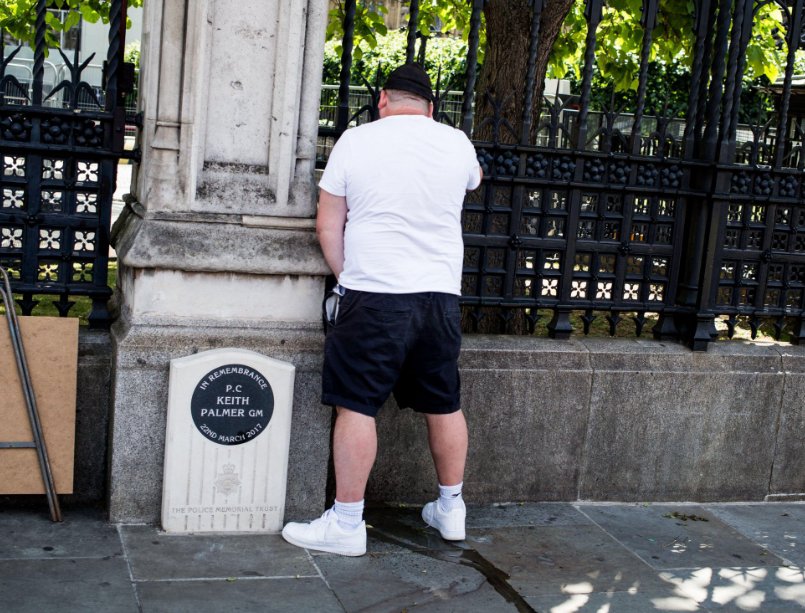 A 28-year-old man has been arrested on ‘suspicion of outraging public decency’ following photographs on social media which shows him urinating on the memorial dedicated to PC Keith Palmer.

PC Palmer was tragically killed in the line of duty after being stabbed by an Islamic extremist who attempted to enter the Palace of Westminster.

It is reported that the man ‘turned himself in’ after images of him urinating on the memorial, went Viral.

The incident occurred as part of a day of counter-protests and violence in central London on 13th June. A large group of far-right activists travelled to London to supposedly “protect statues and war memorials”.

Small groups of Army Veterans and football supporters, as promised, guarded the now boarded up war memorials; although, it was apparent that these groups were in a minority. Most groups who arrived in London came to cause trouble.

We have previously spoken with the Democratic Football Lads Association on their involvement on guarding statues, read about it here!

The Prime Minister described the far-right protestors as “racist thugs” and said Racism has no place in the UK’.

It is believed many of those who travelled to London, did so after Mondays ‘call to arms’ by far-right activists Tommy Robinson; who later decided not to go to London.

Far-right thugs were seen fighting with police during most of their counter-protest. Black Lives Matter protest organizers had previously cancelled their events so that they would not clash with the counter-protest.

Metropolitan police reported over 100 arrests were made during yesterdays violent protests.