Michael Gove announces £705 million to BUILD borders for BREXIT – 4 YEARS after the Referendum! Where did the £2Bn go? 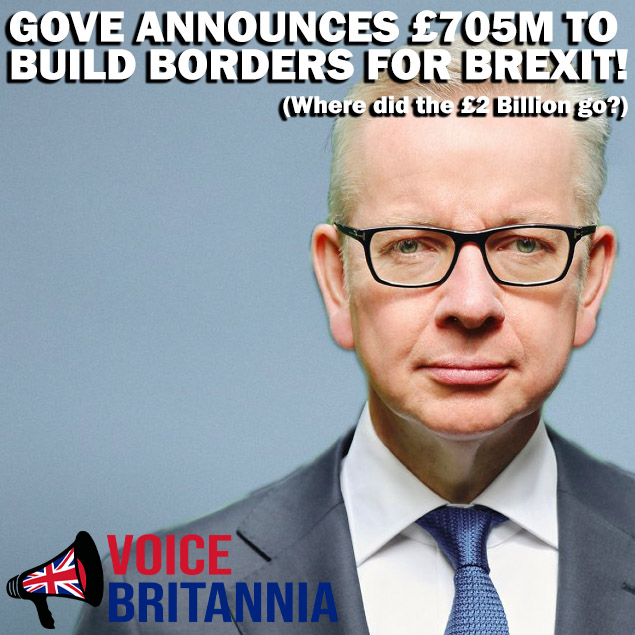 This morning, 4 years after the EU referendum, Cabinet Secretary Micheal Gove and ardent Brexiteer Michael Gove announced a further £706 MILLION investment ‘to make sure our borders are ready for full independence’.

Gove made the announcement this morning in an article posted to the Governments website. In the article, he equates Brexit to ‘moving house’ and attempts to spin Brexit as something needed to fight COVID19! (The rhetoric is strong with this one).

The article contains Goves usual Brexit promotional spiels, with every point made ironically talking about WORKING WITH the EU; The same EU that GOVE HAS SPENT THE LAST FOUR YEARS TRYING TO VILLIFY AND SEPERATETHE UK FROM!

“We can build a trading relationship with our European neighbours that serves all our interests and develop new economic partnerships across the world.”

“That’s why on Sunday we’re investing £705 million to make sure our borders are ready for full independence. We’re investing in new infrastructure, more jobs and better technology to help goods move smoothly, make our country more secure and our citizens safer. The money will ensure that Great Britain’s new borders will be ready when the UK takes back control on January 1 2021, and will also lay the foundations for us to build the world’s most effective border by 2025.”

Missing from this statement was any indication on what the money previously directed towards Brexit was used for, and what this new £705 million is destined to be spent on. It may feel like a century ago now, but in December 2018, then-PM Theresa May announced a massive £2 BILLION funding to prepare for a “no-deal” Brexit (which is where we are heading!).

Within Theresa May’s £2 Bn package to prepare for a No-Deal Brexit, she has assigned £480m to employ more Border Force officers and boost national security at borders. Defra was to receive £410m to focus on ensuring the trade in fish, food and chemicals were uninterrupted, And £375m was to be used to hire more than 3,000 new customs staff and instal new technology at the UK’s EU borders.

Gove’s announcement today, and his indication that the UK’s border with the EU is STILL not ready for Brexit, OVER FOUR YEARS after the country voted to leave raises serious questions on what exactly have the conservatives party actually done to prepare for Brexit; and more importantly – Where did the £2 Billion Theresa May assigned go?

The UK voted to leave the EU in JUNE 2016! It beggars belief that the UK Government still does not have the nation’s borders ready for our exit. today’s statement is an admission that ministers have been wasting time and a damning indictment on the UK governments addiction to procrastination.

Do we need to spend the money, or should this have been done years ago?