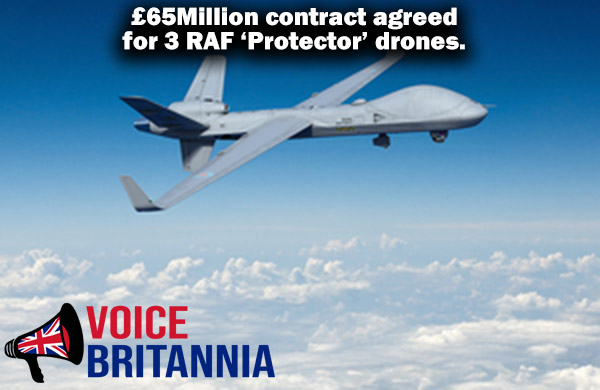 The ‘Protector’ drone is a British developed and built ” Remotely Piloted Air System” which is scheduled to enter active service by 2024. Today, Government announced they will have three built, at a cost of almost £20 Million each.

This morning, Defence Secretary Ben Wallace said in a government statement “The UK is proving once again that we are a world leader in defence technology.

“Protector will provide the RAF with vast global reach, meeting the UK’s defence and security needs for decades to come, and provides another increase to the unmanned inventory for the Armed Forces.

“This aircraft will upgrade a whole range of lethal capabilities allowing us to control, protect and manage the battlespace from the air for hours on end“

The Protector drone is a huge step up from the older ‘Reaper’ UAV’s which have been used in warzones for over 10 years. What makes Protector special is that it’s the worlds first ‘certified’ ‘Remotelly Piloted Air System (RPAS)’ which means it can operate within civillian airspace along side operating in active warzones.

The fleet is set to be based at RAF Waddington, which when combined with the aircraft’s ability to fly for up to 40-hours at a time will enable the RAF to intervene anywhere on the planet within a few hours.