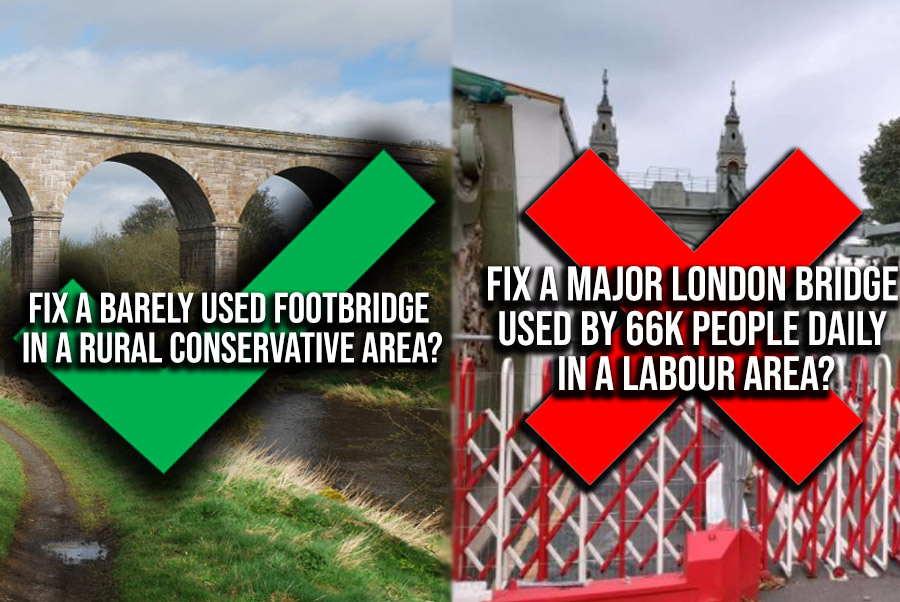 The Hammersmith Bridge has been closed to pedestrians since August. If only the council could move the bridge a few hundred meters down the river, into a Tory ran area, it would have been fixed by now!

Central London’s Hammersmith Bridge is completely closed due to structural defects that the government are refusing to repair; however, this week Government has announced the ‘facelift’ of a little-used 19th-century footbridge in the Scottish Borders.

This week, Government’s Department for Transport announced a ‘Facelift’ for the historic Roxburgh railway viaduct footbridge. The ‘little-used‘ iron suspension-footbridge crosses the River Teviot, built onto the impressive stone-built 19th-century viaduct between 1849-50.

HE’s Fiona Smith said: “It is, therefore, necessary for the structure, which hangs along with a picturesque location over the River Teviot, to be sensitively repaired to maintain public safety and for future generations to enjoy.”

Calling the work a ‘facelift’ is pushing the definition. The ‘refurbishments’ will see all three-spans completely removed from the viaduct. The spans will be taken to a ‘specialist workshop. Specialists will repair corrosion to the bridges metalwork, ‘completely replacing elements’ as necessary.

The repairs will also see new timbers installed before the spans are re-attached to the viaduct. Work begins on the 29th October and is expected to last until spring 2021.

The Hammersmith bridge is currently closed to vehicles and pedestrians. The stone and cast-iron suspension bridge was built 133 years ago. The bridge was closed when sensors alerted engineers that micro-fractures in the bridges cast-iron pedestals, had increased in size. Engineers believe recent heatwaves were the most likely cause of the acceleration of the cracking which was first discovered during renovations in 2019.

Hammersmith & Fulham council called for the bridge to be closed due to the risk posed by the micro-cracking. The cast-iron pedestals are what holds the suspension system in place. Engineers believe the cracks could cause the cast-iron to lose its structural integrity; bringing the entire bridge down without any notice.

Engineers told the council the bridge can be saved, but repairs will cost a lot of money. It will cost £46 Million to repair the bridge for pedestrians and cyclists, and as much as £141 Million fully restore the bridge for cars, busses and other road traffic.

Hammersmith & Fulham Council cannot afford to repair the bridge. The council asked the government’s Department for Transport to help pay for repairs, but they refused to foot the bill.

Instead of fixing the bridge, government created a ‘Hammersmith Bridge taskforce’ with a view to finding solutions to the Hammersmith bridge problem. Currently, the only solutions pitched by the task force are a ferry service; and an extra 533 bus every hour during ‘weekday peaks’ (to help children get to and from school).

Highways England describe the footbridge as “a key part of a popular and circular walking route” however the reality is viaduct was closed to rail traffic decades ago and has been used as a pedestrian crossing for years; The footbridge only crosses three of the viaducts spans! Much like the assertion that the work is ‘facelift’, calling the work ‘much-needed’ is a pretty big exaggeration.

In terms of importance, for thousands of Londoners who live in its vicinity, the Hammersmith bridge was essential. Before the closure as many as 16,000 people crossed the bridge on foot or by bike every day; And before the bridge’s closure last April, 22,000 vans and cars were crossing the bridge daily.

More people live in the 2 miles round the Hammersmith bridge than the entire Scottish Borders region.

Knowing the importance of the Hammersmith Bridge, and the objective unimportance the Roxburgh viaduct footbridge; It seems fair to ask why the unimportant bridge is getting fixed while the important one is being left to rot? Sadly, the answer is politically driven deprivation of areas that don’t vote Conservative.

The Hammersmith bridge is owned by, and located within the Labour majority Hammersmith and Fulham Council district. The bridge also finds itself within the Hammersmith Parliament constituency, currently held by Labour MP Andy Slaughter (who has held the seat for almost 20 years). Hammersmith is a Labour stronghold and has been for decades.

In comparison, the Scottish borders are one of the few Scottish Tory blooms. The Roxburgh viaduct is located within the Berwickshire, Roxburgh and Selkirk constituency. Conservative John Lamont MP has held the rural swing-seat since 2017; Clinging on by 4,000 votes in 2019. The Scottish Borders council also happens to be a Conservative majority.

As Hammersmith and Fulham council is held by a Labour majority, and the current London Mayor (Sadiq Kahn) is a Labour politician, the Conservative government does itself no favours by fixing the bridge. Leaving the bridge broken is a rhetorical win for both the Conservatives in the local and Mayoral elections.

Nothing screams failure like a bridge crossing one of the worlds most famous rivers, being closed because its owners can’t afford to fix it. It doesn’t matter who is actually to blame; all that matters is the physical metaphor exists, so it can be used as a political flick-knife.

The Scottish Borders on the other hand finds itself at the front lines of Conservative politics. The battle for Scotland is the biggest non-COVID war the Conservatives are fighting. If Holyrood becomes an SNP majority the Tories will be forced to give Scotland a second indepdence referendum; It is because of this, and the constituencies swing-seat status, the Conservative party will move heaven, earth, and antique bridges to keep hold of as much of Scotland as they can.

If that means throwing money at pointless vanity projects then so be it!

This is and always will be how Conservative politics holds power. They will gladly lie to and deprive people so they can point the blame at their opponents. It is a perverse example of politics gone wrong.

However, in London. A council is begging for help. But a 133-year-old bridge; an essential crossing between the North and South of the UK’s Capital city, is closed and will not be fixed because ‘its a Labour area’.

When we elect our MSP’s or MP’s we do so in the belief that whoever wins will look after us regardless of who we voted for, as one nation. No one takes part in elections in the belief that they will be punished for voting the wrong way. Sadly, this seems to be how contemporary politics works; or at least how Tories think it should work.

What is certain is this is not a healthy way for democracy to work.