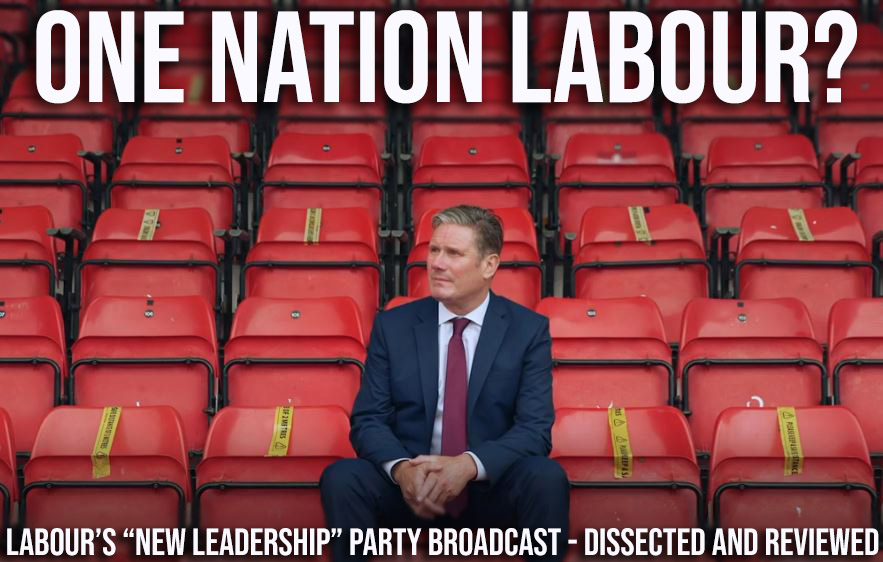 One of the biggest complaints Labour’s right had about Jeremy Corbyn was that he was ‘on the fence’ on important issues; But in Labour’s latest party broadcast, Sir Keir gives the party a lesson on fence-sitting!

Voice Britannia has obtained a copy of Labours party political broadcast which is to be aired this evening at 8 PM. (23rd September). The short film revolves around the themes of patriotism, COVID-19 and framing the Labour party under Starmer’s leadership as vastly different to what it was under Corbyn.

Starmer – Man of the people

The film opens with audio of Keir Starmer speaking on the phone to members of the public about the struggles they have faced during the Pandemic. The people tell the Labour leader that when their darkest hour arrived there was no one there to help them.

This concept of patriotism is hammered home throughout the film, with shots of homes proudly flying the Union Jack flag, and Starmer speaking with ex-military servicemen.

Standing outside his childhood home, Starmer proclaims: “This country has given me so much. The chance to be the first in my family to go to university. To go on into the law. And, to lead our Crown Prosecution Service for five years.”

Because nothing screams patriot more than a few decorated pensioners, a trip to a council estate and telling the public “I AM THE LAW”.

The film makes a strong attempt at framing Sir Keir as a friend of small business. We see business owners placing ‘vote labour’ placards in their windows.

It was during this segment where Starmer tells the viewer: “The united kingdom is founded on values that I share. They are the values of the Labour party that I lead.”; A clear attempt to frame Sir Keir’s Labour party as vastly different to Corbyn’s Labour. (Is it? Really??)

One of the more interesting themes I picked up on in the film is Starmer’s ‘one nation’ view of the United Kingdom. During this film, he never mentions any of the UK’s four nations by name; preferring to talk about ‘our country’, always in the singular sense.

Also stark by its omission is the complete avoidance of Scotland and the question of Scottish independence. We see Sir Keir taking the train to Scotland and we see him at the door of the Scots Parliament, but that is where it ends. (At least Scotland got a mention).

Addressing the problems of today.

It is almost 3 minutes into the film before Starmer finally talks about the problems that exist in British society.

“The pandemic exposed deep injustices, inequalities and discrimination in society.

“A Social care system that doesnt grant our parents and grandparents the dignity they deserve. A generation of children robbed of an education.

“It’s laid bare the unfairness of our economy. “

“No one can look at the country today and say things dont need to change.

“I believe a better future is possible for this country.

“Our mission is to win the trust of the British people, so together we can forge a better future.

This was the part of the film were I expected some sort of opposition to Boris Johnson’s government to appear; But while Starmer highlights the deep injustices many in British society faces, he stops short at pointing the finger at blame at anyone or giving any solutions.

This film could have (and probably will be) condensed down to 40 seconds, and even then it wouldn’t really say much. All this film does is state the bloody obvious in the most pedestrian way possible.

The sole purpose of this film is to make Keir Starmer seem like a credible leader of the opposition, but much like his continued lacklustre debates with Boris Johnson, he lacks the fire to make his words convincing.

Politically, many Labour members will be suprised by the films attempts to make the party more appealing to the right. There is flag-waving, veterans, war memorials and Starmer’s glowing pride at being part of the law; all things which are steeped in (small c) conservative ideology and likely to annoy a large amount of Labour members.

Keir should have used this three minutes of TV time to hold Boris Johnson’s feet in the fire and draw attention to governments continued failures with COVID-19, Brexit and the day to day running of the UK.

Watch the FULL Party Broadcast on BBC 1 tonight @ 8pm. Admittedly I had bearly any time to watch this film and break it down into this analysis. Watch the film this evening then tell us what you think on Twitter.