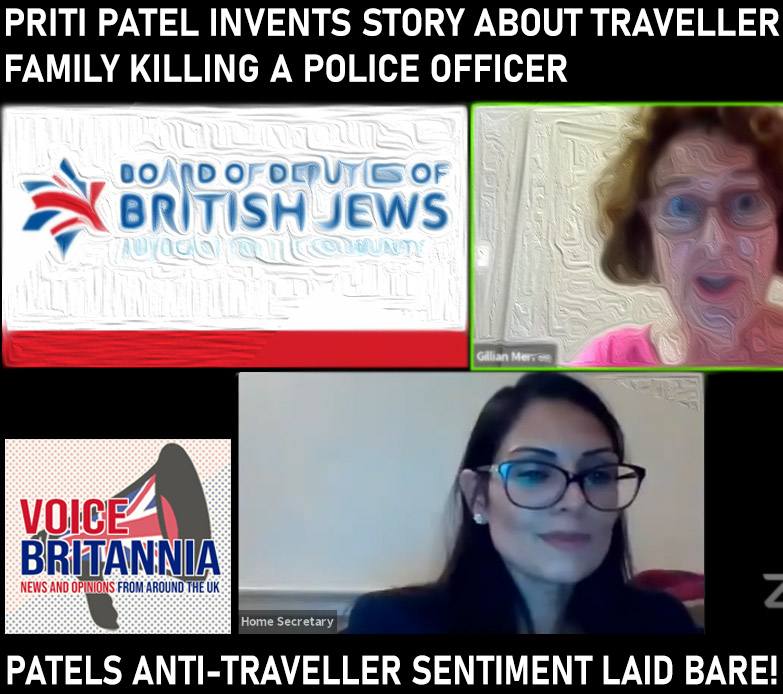 Voice Britannia is often one of the publications that report stories (like this one) long before the mainstream media get to it, but because of our size, we are ignored by search algorithms. PLEASE help by sharing our posts.

Damning footage showing Priti Patel telling the Board of Deputies an untrue story about a ‘traveller family murdering a police officer’ has been uncovered. It is believed the Home Secretary was referring to the horrific killing of PC Andrew Harper.

Help Voice Britannia by sharing this post! It’s free and helps us more than you could imagine!

The footage originates from an interview between Priti Patel and members of the Jewish Board of Deputies recorded mid-September. The interview featured questions from the group’s members on many topics.

Patel interviewed by Board of Deputies

As the interview progressed, the topic briefly moved to Gypsy Roma and Traveller communities. Host Gillian Merron told the Home Secretary about how the Board of Deputies had expressed ‘anxiety’ to the Home Office in relation to proposals on ‘unauthorized encampments’; with the Board believing problems stem from a lack of authorised sites.

The Board of Deputies stated their support for the Gypsy Roma Traveller community stemming from their shared experiences of persecution by Nazi’s in World War Two.

Merron asked the Home Secretary: “Could you tell us what you will do to support the marginalised community?”

The Home Secretaries answer was surprising. The question Merron asked was about the lack of authorised camps for traveller communities, and how the Home Office would support the marginalised traveller groups.

Patel first made the stunning claim that ‘traveller communities and unauthorised encampments’ were different to Gypsy Roma communities, stating “they were absolutely different”.

Patel told the Board of Deputies: “We have seen criminality and violence taking place. We saw one particular traveller criminal, I can’t talk about the details of this, but basically, we saw a police officer which was effectively murdered through a robbery which took place by a traveller family. So there are things that do need to be looked at.”

It is believed Patel was referring to the murder of PC Andrew Harper; who was killed by three men earlier this year. This allegation that a ‘traveller family’ had killed an officer has offended many in the community.

The Traveller Times (the stories original source) wrote: “The three convicted teenage killers of PC Harper were found not guilty of murder and they were not Irish Travellers and had no connection to “unauthorised sites”. Nor were they known to be related.

“The Home Secretary’s comments could be paving the way for the Governments new anti-Traveller laws set to be launched this Autumn, say campaigners.”

The Home Secretary is often accused of using dog-whistle discourse and marginalizing groups of people based on race or religion; with this instance being yet another example of her lack of empathy.

Patel was not asked about crime. The Home Secretary was asked how the home office would help support travellers, But she used her response to invent an untrue story about the murder of a police officer by a traveller family; in turn, smearing all traveller communities.

*We have reached contacted the Home Office and Traveller groups for comment.