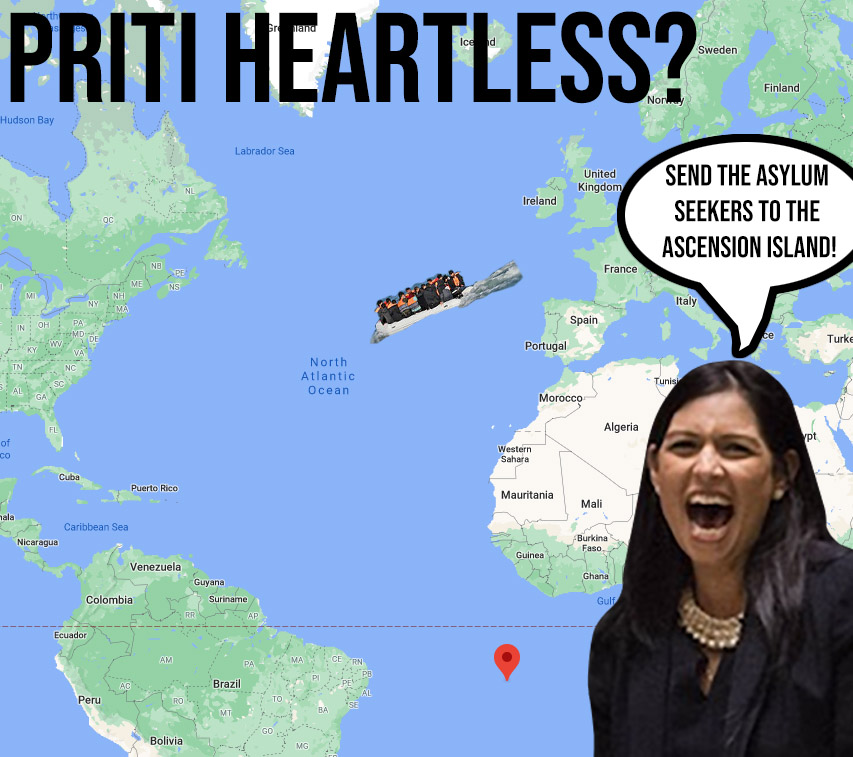 Shadow home secretary Nick Thomas-Symonds described the plan by saying ‘This ludicrous idea is inhumane and completely impractical’; So, it’s no surprise it came from the mind of Priti Patel!

During this summers political break, the only story (other than Coronavirus) was the grossly inflated reports of asylum seekers crossing the English Channel in small boats.

Priti Patel looked to make this her flagship policy and gain as much political capital as she could from the UK’s migrant-fearing right. She was aided in her quest by a wealth of junior politicians; including Tory rape beneficiary Natalie Elphicke who looked to make her own, loud waves while her ‘former husband’, Charlie Elphicke (who she stood by the whole time), was sentenced for sexually assaulting two members of his team.

As the Summer break rolled on, The Home Secretary kept adding to her anti-migrant campaign. She called in the RAF’s SUBMARINE HUNTING P-8 aircraft, an A400 Cargo plane, and one of their ‘Shadow R1’ surveillance craft which is usually used to monitor warzones. Patel also threatened to call in the Navy, but it is unknown if they refused, or if she was told to dial her rhetoric down.

Summer is now a distant memory, but in politics, nothing is forgotten. The FT reported yesterday that Patels plans did not stop at treating asylum-seekers like an armed militia; Rather, they kept getting more extreme.

The Home Secretaries long term plan to deal with migrants was to send them to an encampment on the ASCENSION ISLAND. The deserted volcanic island is located closer to Brazil than it is to the UK, over 5000 miles from the English channel … in the middle of the South Atlantic ocean.

It is unknown how the home secretary was planning to get the migrants from the English Channel to Ascension or how they would be able to survive on the island; Which has a population of around 100 people and no infrastructure.

A Westminster source told VB “We thought Priti was joking, as this plan would have ended with the home office spending huge amounts of money on building the required infrastructure – much more than we currently spend on controlling small-boat channel crossings. It was cheaper to charter a jet and house the migrants in hotels.”