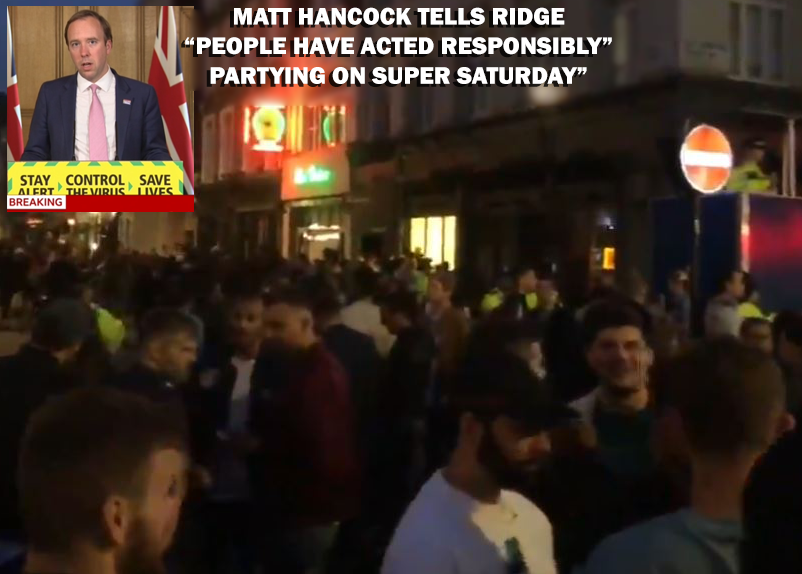 Health Secretary Matt Hancock appeared on Sky’s Sophy Ridge this morning to face questions over the public, and the Polices response to ‘Super Saturday’.

The interview opened with Hancock being asked how Super Saturday went, and the comments of John apter, chairman of the police federation. Apter reported an evening of drink and drug-fueled anti-social behaviour in Southampton; commenting “crystal clear is that drunk people can’t/won’t socially distance”.

Hancock replied by defending his view that “people have acted responsibly”; claiming that he was “pleased at what happened yesterday” and that people were “mostly social distancing”. Hancock ended his defence of the pubs reopening by stating ” we will take action if a minority break the rules”; however, footage from Soho (below) showed that the majority of revellers chose to ignore social distancing rules with police standing by and allowing it to happen.

Matt Hancock’s description of Super Saturday as being this jovial, well mannered and socially distanced trip to the pub simply is at odds with most reports VB have received.

Government are in a position where they need to build as much trust with the public as they can; however, they seem blind to the fact that every distortion of truth they use to defend their plans erodes the public trust a little more every time.

Has Government done the right thing by opening pubs so soon after COVID19, or should we have waited longer?