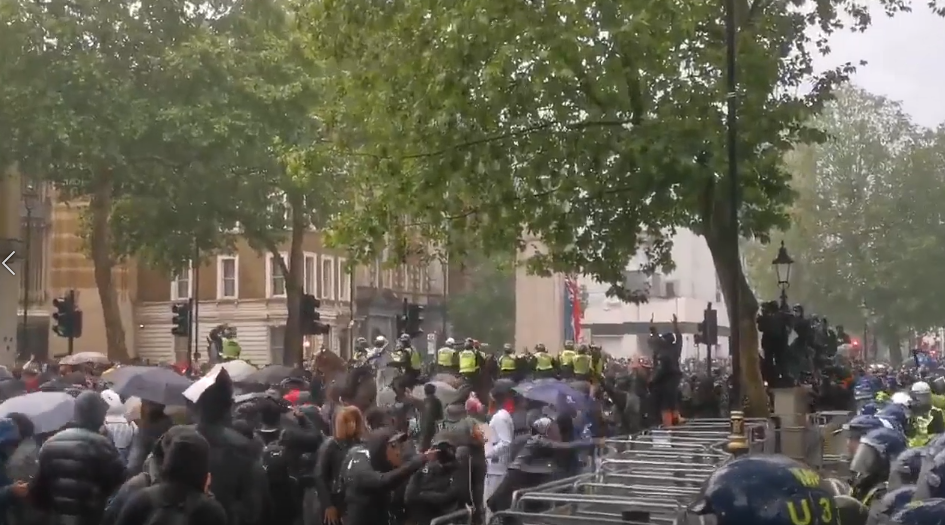 The protest was mostly peaceful, but the London police commissioner “condemned the violence” directed towards officers. The claim of violence received a mixed response, as footage from the protest showed mounted-police ‘charge’ on protestors.

We have collated all publically available footage of the London protests to go with this article.

Police reported 27 officers were injured during the 14 protests that happened across London in the last week. The most serious incident happened when a mounted-police officer was knocked off her horse.

The incident happened when mounted-police appeared to have charged at peaceful protestors. The amping-up of the situation by Met Police led to the officer’s horse bolting, knocking the officer off her horse with a set of traffic lights, before running towards the protestors.

A source told VB that ‘a far-right had shown up, which led to officers charging at protestors’ but that the ‘police charged at the Black Lives Matter protestors’.

The evening drew on

As the evening drew on the protest remained peaceful although Met Police began to stop protestors leaving the area. George Starkey-Midah was live-tweeting from the event and witnessed the police “kettle in” protestors.

Over the following hours, Police slowly penned the protestor into a smaller area, refusing their exit from the scene. Police stopped anyone from leaving until they had identified everyone there under threat of arrest for ‘resisting’.

Questions were raised on the conduct of officers, as protesting is legal and should lead to a person being ‘suspected’ of anything.

Protestors were then escorted out of the area by police, who then used ‘dispersal’ powers to ban them from Westminster for 24 hours. The timing of this dispersal-act ban will stop protestors from attending todays Black Life Matters protest in London.

Police will face scrutiny on their handling of the event footage has shown that the event was quite well mannered, with the Police biggest injury being self-inflicted.