Police given new ‘search and detainment’ powers to tackle ‘espionage and foreign interference’ at UK ports – but are they too vague? 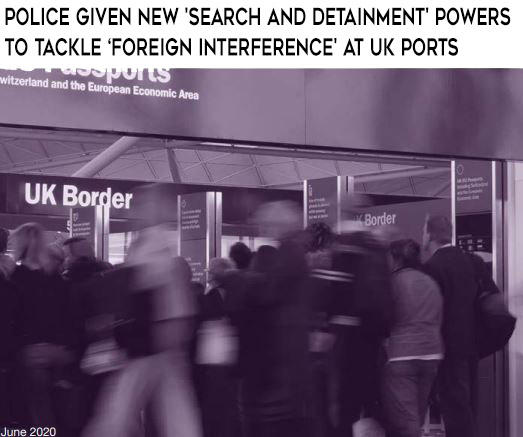 The Home Office has announced that Police have been given new powers that will enable them to tackle espionage and foreign state interference; However, they open the door to ‘specially trained’ officers to stop and search almost anyone travelling through a UK port.

The new powers, which came into effect today (13th August) open the door for ‘specially trained police officers’ to stop, search, question and if needed detain people as they pass through ‘UK posts’, to ascertain whether they may be involved in ‘hostile state activities’.

The new ‘schedule 3 powers’ have been introduced in response to the Salisbury nerve-agent attack in 2018. The Home Office claims the new ‘code of practice’ which sets out how the rules will be used and overseen, will include a ‘robust safeguards’ such as ‘independent oversight by the Investigatory Powers Commissioner’; Although, it is unlikely that any commissioner would be able to protect travellers against the misuse of this power on a day-to-day basis.

The guidelines on who can be stopped, searched, detained and questioned by police officers in accordance with the Schedule 3 powers are worryingly vague. The new powers (seen above) will essentially give offers the power to stop and detain anyone due to an ‘Observation of a person’s behaviour’ or by ‘Referrals made to examining officers by other security, transport or enforcement bodies’.

This means that Officers with these powers will be able to stop and search ANYONE who is travelling through a British ‘port’ (air/international rail and sea), on the basis of them not liking their behaviour or a report from an unnamed ‘enforcement body’.

Home Secretary Priti Patel said: “These new powers send a very clear message to those involved in it that this government has zero-tolerance for those acting against British interests.” While it is good that the Home Office is attempting to be pro-active, as per usual it seems they are willing to sacrifice the privacy of citizens and treat all travellers as suspects.

Oct 28, 2020 news desk
%d bloggers like this:
We use cookies to ensure that we give you the best experience on our website. If you continue to use this site we will assume that you are happy with it.Ok