President Trump orders the US to buy up virtually ALL global stocks of Covid-19 fighting drug remdesivir! 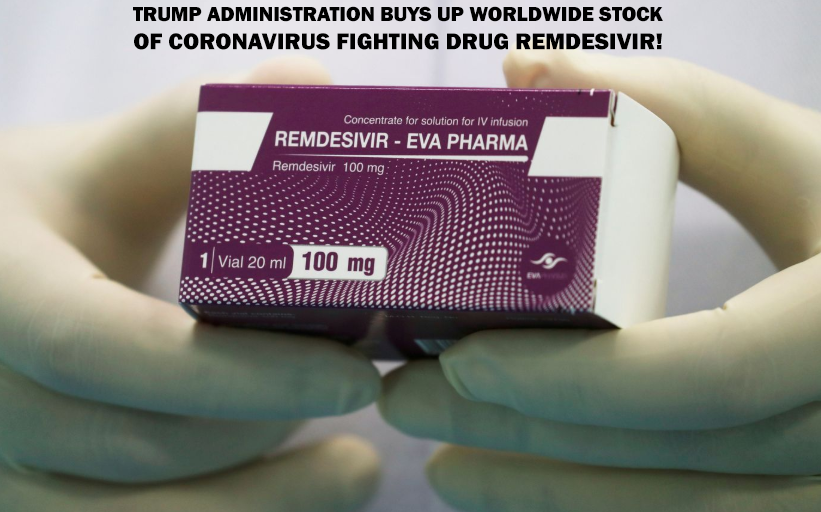 President Trump has ordered his administration to buy up virtually all of the world’s stock of COVID19 fighting drug, remdesivir. Experts in the UK, Europe and the rest of the world now worry as no remdesivir stock will be available for anyone else; for almost three months!

Remdesivir was created by Gilead and can help people recover from COVID19. Initially, 140,000 doses of the drug were supplied to trials globally; However, stocks have run out.

Trump has ordered his administration to buy almost 500,000 doses of the drug. It is believed the order would require most, if not all of Gilead’s production capability until September.

Remdesivir is made by American pharmaceutical giant Gilead and was originally created to treat hepatitis C. IN May 2020, Scientists in Japan approved remdesivir for use in treating patients with COVID19. Trials of the drug have shown it can reduce the length of time they experience COVID19 symptoms by stopping the virus from reproducing.

Dr Andrew Hill of Liverpool University told the Guardian “They’ve got access to most of the drug supply (of remdesivir), so there’s nothing for Europe”. Speaking to Sky News, Dr Hill went on to say: “This deal that’s been struck by America means that people with COVID-19 in the UK can’t get access to these treatments that would get them out of hospital quickly and might improve their chances of survival.

“So far, we know that for the next three months there will be no supplies of remdesivir – America will take the drugs and we won’t have access to them. That’s the case in the UK and Europe.”

Business minister Nadhim Zahawi has hit out at the Trump administrations attempts to buy all remdesivir stock, telling sky news “By attempting to compete we ultimately undermine all our strategies”.