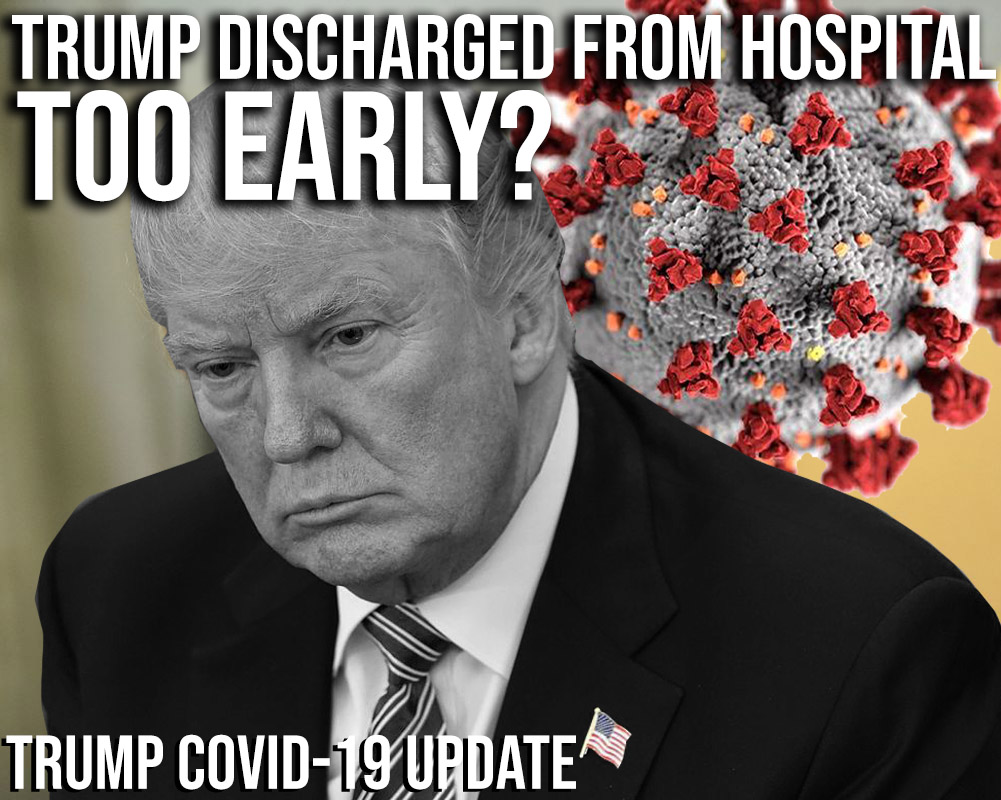 President Trump has shocked many by being discharged from the hospital while still COVID-19 positive. Trump’s medical team said the president was in good health; however, admitting ‘he is not out of the woods yet’.

During the day, Trump was telling those close to him he is ‘done with hospital‘; telling the press ‘he feels the best he has in 20 years‘. The President is claiming his bout with the virus has taught him everything he needs to know; Worryingly telling people “not to be afraid of Coronavirus” while thousands are still dying.

Not every member of Trump’s team is happy with his early discharge. White House advisors were advising Trump to remain in hospital, but Trump demanded to go back to the Whitehouse as soon as he could. Dr’s worry that the effects of the steroids and experimental drug ‘cocktail’ may be masking Trumps current COVID-19 symptoms; and the President could relapse.

Another developing scandal is Trump’s medical team’s refusal to say if Trump has tested negative for Coronavirus. The president is believed to still be COVID positive and putting many White House staff and Secret Service agents at risk of catching COVID-19.

White House staff also worry if the President’s condition relapses he will have to be flown back to Walter Reed; Which will be very embarrassing. Medical experts outside of Trump’s team are concerned about the reality of the president’s condition, and how honest he has been; As the president seeming more concerned about ‘not looking weak’ than getting free of the virus.

Trump gets discharged from Walter Reed

As the time came for President Trump’s discharge; a cordon was set up around Walter Reed. Roads around the hospital were closed in preparation for the Presidents exit.

Trump exited the hospital’s main door under his own power. Wearing a flimsy mask, he stopped briefly to hold up a defiant fist before walking to his car. Trump only spoke to say “thank you”.

As Trump entered Marine One for the flight back to the Whitehouse, medical experts were in shock at the lack of PPE being worn by his staff; With Secret service staff only wearing face coverings while being in direct contact with a contagious President Trump.

As the President heads back to the White House, serious questions remain about Trump’s condition, and the amount of risk he is creating for those close to him.

American media have been left stunned at the scenes of complete ignorance towards the deadly virus; and the health of EVERYONE who works at the White House. Donald Trump still very much has Coronavirus.