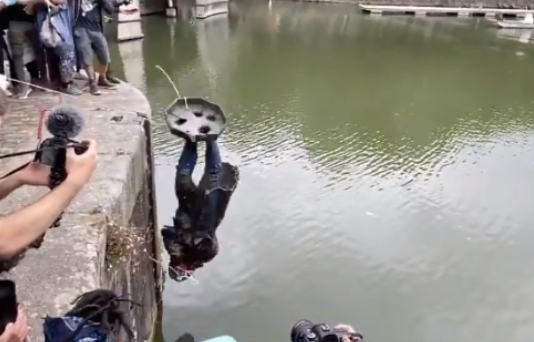 The Home Secretary has lashed out at protesters the weekend’s Black Lives Matter events, calling them ‘violent’ and disorderly. Patel’s words come after news of the vandalisation of a statue, of 17th Century slave-owner Edward Colston.

Protestors pulled the statue down with ropes then threw it into a Harbour. The incident happening at Bristol’s Black Lives Matter protest.

Patel said: “Under the rules we have put in place, it is illegal for gatherings of six or more people outside, in open air, to get together – and that is unacceptable”.

Avon and Somerset Police have launched an investigation to identify those responsible for damaging the statue. Priti Patel described the actions as “Sheer vandalism”.

While Government ministers and right-wing commentators rally to defend a racist statue, people in Bristol are rejoicing the statues destruction.

Speaking about Saturdays BLM protests, Patel said: “I am pretty certain that the British public will agree with me that what we saw was completely wrong, it is shameful, and quite frankly that is why these protests should stop” describing the scenes as “violent behaviour”.

Piers Morgan has described Patel’s outrage over the damage to the Coulson statue as “tone deaf”. Saturday’s protests were a mostly peaceful affair. The only notable incident involved a bolding police horse, leaving one officer injured. Reports from the protest told of a low amount of arrests although police banned many protestors from Westminster for 24 hours.

Priti Patel will hope that her stern reaction wins points with the PM. This weekend, papers reported that Priti Patel’s job is on the line, for not defending Dominic Cummings. With a rumoured Government reshuffle looming Priti Patel will want to look ‘strong and stable’, which does not come naturally to Patel.