Public face £12 MILLION bill for the NHSX app THAT DOES NOT WORK! Where did the money go? 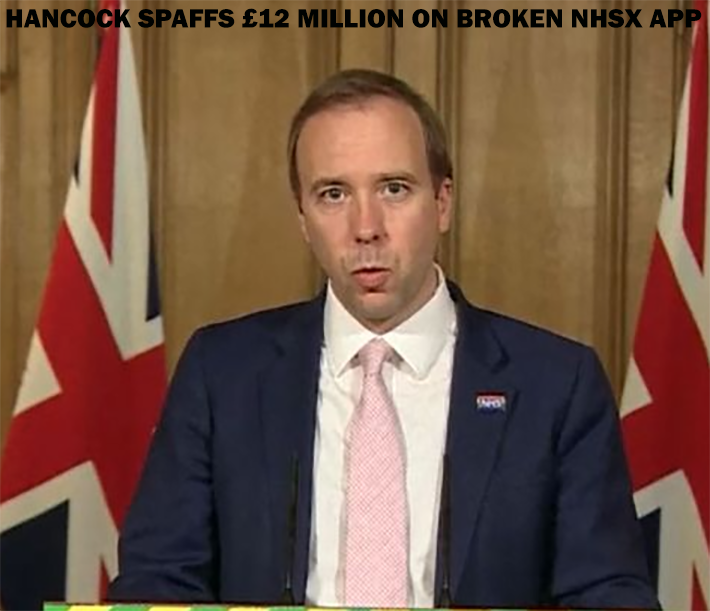 The House of Lords Health Minister Lord Bethell revealed to Lords that the COVID-19 contact-tracing APP cost the public £11.8 million! This revelation came days after Matt Hancock announced the scrapping of the project in favour of an app run by Apple and Google. Does anyone know where the money went?!

In recent weeks, Matt Hancock has raved about his Contact-Tracing app which was being tested on the Isle of Wight. While he was boasting about his “world-beating” program, the reality is that the app was fraught with errors; It could only be run on Apple devices and could only detect one in every 25 people.

The NHSX app program came under fire from opposition ministers, the press and the public; with many wanting clarification on how the app and how much personal data users would be asked to submit.

The government had tasked ‘Faculty’, a company with ties to Dominic Cummings and the ‘Vote Leave’ team, to create and test the NHSX app in a contract worth £930,000. It is now believed that Matt Hancock plans on having a contact-tracing app ready “by autumn”.

It is unknown how the cost of the app ballooned to nearly £12 Million. The Guido Fawkes website attempted to break down the numbers in a recent blog, but like us, they were unable to work out how the money was spent.

With a lack of a competent contact-tracing program, and millions being wasted on pointless projects; many are asking “can we trust the Government to relax social distancing while we have no way to track new COVID-19 cases?”.

CLICK HERE FOR THE CHANCE TO WIN £10 AMAZON VOUCHER AND A ‘VOICE BRITANNIA’ MUG!