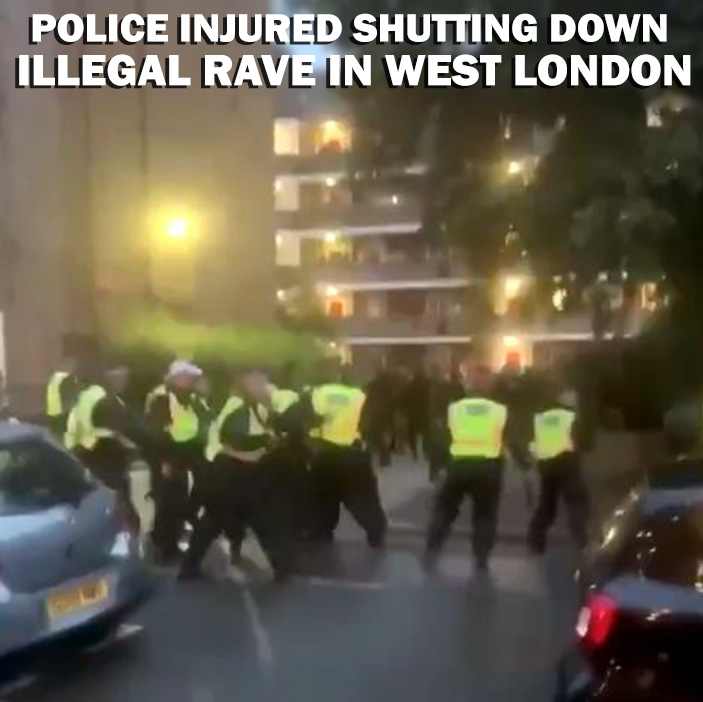 Met police were met with a barrage of bottles and bricks as they attempted to shut-down an illegal party in West London last night. However, those attacking the police claim they “weren’t doing anything wrong”.

The illegal rave on Hammersmiths Havelock Close was closed down by police after 10 PM. Sky News report that as soon as it was known police were arriving, partygoers began to disperse from the venue, on to the surrounding streets.

Riot Police were spotted rushing towards the venue by the now-angry revellers, leading to violent clashes between the police and disgruntled ravers. A man, who was throwing bricks at the officers told a Sky News reporter “I just don’t like the way they turned up and were being so aggressive with us. We weren’t doing anything wrong!”.

The Met Police have faced criticism for their hard response to illegal parties in the capital, with many believing the use of police in ‘riot gear’ is unnecessary.

The violent response initially forced the Police into a retreat before riot police arrived and took control of the situation. Police issued a dispersal forcing partygoers to leave and not return for 24 hours. A reported 7 police officers were injured however none of their injuries is life-threatening.

Mayor London, Sadiq Khan, told the press “It’s disgraceful that police officers came under attack with some suffering injuries at an illegal gathering in White City.

“Violence against the police will not be tolerated and perpetrators will be caught and prosecuted.”

Khan went on to confirm that ‘extra police would be out’ on Saturday night. Deputy Assistant Commissioner Laurence Taylor told the media “These gatherings are illegal and also pose a risk to public health”. IN recent weeks, a number of illegal parties have been broken up by police, leading to many officers injured.

Should police break up illegal raves, or allow parties to continue if no other laws are broken?