Road Works too slow? Highways England has announced they are upping the ‘basic speed-limit’ for driving through roadworks! 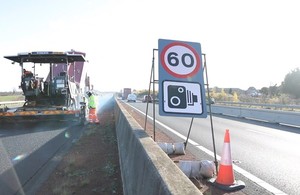 Highways England has announced that the ‘basic speed’ at which drivers can drive through roadworks is to be made 10 MPH faster!

Highways England claim that ‘after extensive and innovative research’ into the speeds at which people can safely drive through roadworks has found that ‘where it is safe to do so’ vehicles will be allowed to drive at up to 60 MPH through road works.

This rule change comes in response to a consultation exercise between the public and Highways England; road users told H.E. they were frustrated at not being able to go quicker. The results of Highways Englands study into the rule change showed “as well as saving time, more people are sticking to the higher speed limit, so bringing safety benefits”.

Jim O’Sullivan, Highways England Chief Executive, said: “All of our research shows that road users benefit from 60mph limits in roadworks. They have shorter journey times and feel safe.

“Road users understand that roadworks are necessary, but they are frustrated by them. So testing 60mph has been about challenging the norm while ensuring the safety of our people working out there and those using our roads.

“We have a huge programme of work planned, so being able to use 60mph where safe will continue to improve everybody’s experience of our roads”

Between 2011 to 2015, 429 fatal injuries at road construction sites occurred among road workers; with more than half (52.2%) of road construction deaths connected incidents where a worker was struck by vehicular equipment (Source).

Road construction work is factually one of the most dangerous professions in the UK. Few things protect our road workers, hi-visibility clothing can only do so-much with speed limits being one of the few, effective and cost-free ways of protecting road workers. Allowing cars to travel faster through road works seems counterproductive to creating a safe environment.

We will have to see how this new policy works in practice – and hope road workers don’t suffer while we wait for results.