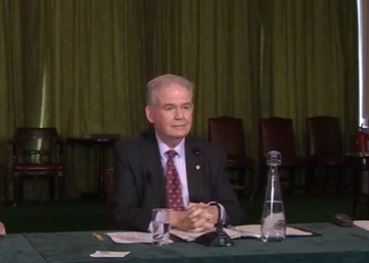 After more than 6 months of delay, the Inteligence and securities “Russia Report” was finally released today with the damning warning that “Russian influence in the UK is the new normal”. We look at the reports key points.

Later in the week, Voice Britannia will have a more in-depth look at the report which will take a few days; however, in the meantime, let’s look at the key points from todays release!

The report states that Russian influence in the UK and British politics is ‘the new normal’ due to successive governments choosing to ignore the problem; instead, welcoming Russians and the money, they bring with them.

The ICS asserted that the UK is a target for Russian disinformation and that over time the Russian influence in government led to an ‘industry’ of enablers within a manner of different industries who had been employed, both “wittingly” and “unwittingly” into working for Russia state actors.

The report documents reports of Russia interference in the Scottish Independence referendum, with the interference, described as “potentially the first post-Soviet Russian interference in a Western democratic process“.

The ICS committee concludes that they have seen no actual evidence of Russian state interference, as Government will not share the information with them. Until this happens, the committee will not be able to ascertain if Russian interference had occurred in the 2019 General election. The problem the ICS has is that government did not try to look for any evidence of interference, meaning that if any interference did happen, government essentially turned a blind eye to this!

Join in the discussion at our new forum! Later today, we have a counter-article to the Russia Report and another story in the pipeline!