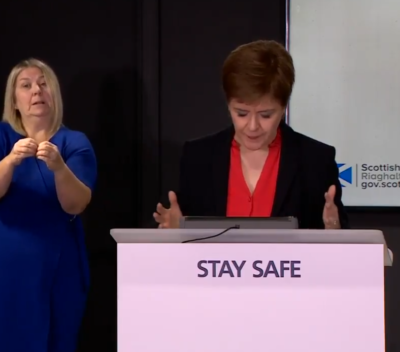 Nicola Sturgeon answered questions today on whether Scotland would be looking to impose a 2-week quarantine on all travellers crossing into Scotland from England.

The First minister stated that “right now, we have no plans” to quarantine travellers from elsewhere in the UK. However, the FM did say that considerations were being made towards the potential of quarantining travellers from England “as we move further through this pandemic”.

As Scottish infections rates fall, Sturgeon is looking at all ways she can protect Scotland from further outbreaks. Sturgeon confirmed that if rates/levels of infection in Scotland continue to fall, and “other parts of the UK” continued to rise, that “from a public health perspective” she would consider taking action to mitigate and guard against that risk, which could include closing the border.

The First Minister did her best to distance any talk of closing borders from talk of Scottish Independence. The FM stated these issues were “first and foremost, and entirely, about public health”.

For the 4th day in a row, Scotland reported no COVID19 deaths and 740 patients are currently in Hospital with the virus. This news comes as Scotland’s non-essential stores open their doors for the first time since the lockdown began in March.

Nicola Sturgeon also pitched plans for a UK-wide economic stimulus programme worth £80 Billion; which includes a temporary cut in VAT and job-guarantee programs to try and stimulate the ecconomy following the COVID19 pandemic.