Seriously, where do we even begin? Boris Johnson: Confuse, Divide, Demoralise #SwindonOnSunday 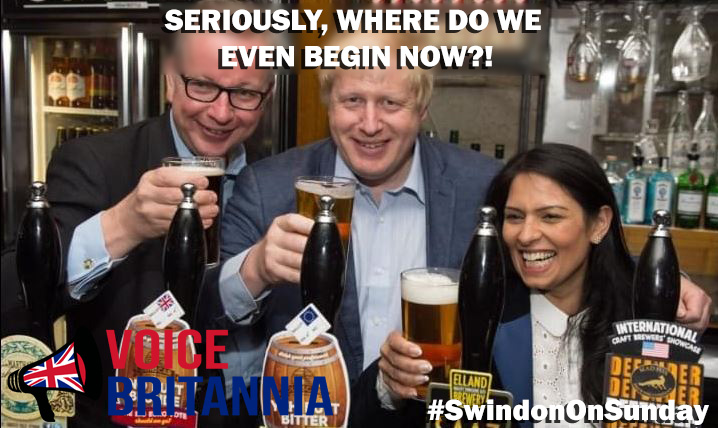 Seriously, where do you even begin to start right now?

By his own Houdini-like standards, the Prime Minister has been remarkably visible this week. Not to be held accountable for his catalogue of failures over the last few months, but to tell people to use their common sense on Super Spreader Saturday. Now, most of us don’t need telling about common sense when it comes to protecting our loved ones, and we certainly don’t need Boris Johnson telling us.

It would be simple to blame the people of Newcastle, queuing up for a beer at 6 am, or the hordes in Lincoln enjoying an early morning ale, but the simple option isn’t always the right one.

The mixed-messaging has been widely criticised   – One critic, Robert West, who sits on Sage’s Scientific Pandemic Influenza Group on Behaviours (SPI-B), said attempts by ministers to encourage people to return to shops and pubs had been “problematic” at this stage in the pandemic.

Within hours of the Prime Minister telling people to behave responsibly, you are told the pubs are opening from 6 am. Think about that for a second. The message from Johnson is simple: Keep Calm, Start Boozing, F*ck the NHS.

Nursing staff are hugely anxious about yesterday’s reopening of pubs, and rightfully so. Nothing says “Happy 72nd Birthday NHS” quite like stumbling into A&E and vomiting all over a nurse. But they think it’s OK. Boris Johnson gave them the green light, the freedom that their ‘patriotism’ demands. But don’t forget, they clapped for the NHS, every single Thursday, and they don’t mind foreign nurses because they’re not like ‘all of the other type’. Racists.

His handling of this crisis hasn’t just been abysmal, it has been disgusting.

We’ve seen 20,000 deaths in care homes – in years to come this will be exposed for the huge scandal that it really is. We have the third-highest Coronavirus death toll in the world. We could’ve saved thousands more lives had Boris Johnson acted sooner. Editor of the Lancet, Dr Horton described the government’s response to the emergence of the Covid-19 virus as ‘slow, complacent and flat-footed’, a reaction that shows the government was ‘glaringly unprepared’ for the pandemic.

Blame Boris Johnson, the man who says he doesn’t do gestures, such as taking a knee for Black Lives Matter – but he’s OK with things like a garden bridge, hanging from a high wire waving flags, kippers, bricks, and lighting a candle outside the door of Number 10 Downing Street, to remember the many fallen victims of Covid-19.

Finally, let’s hope Stanley Johnson decides to stay in his Greek Villa. The Prime Minister was asked about his Dad’s getaway on Friday morning, and despite him breaching the international travel guildelines, Johnson Junior simply said, “you’ll have to take that up with him.” He is supposed to be the Prime Minister!

The lack of clarity, the lack of leadership, the intentional mixed-messaging, the constant fucking failure, I’m absolutely sick of the sight of Boris Johnson and his cabinet of inadequate thugs, such as Raab, Patel, Gove, and all of the others.

So all of this leads to just one final question…

Why on earth aren’t the Labour Party *at least* 20 points ahead of the most disastrous failure of a government in living memory?

Perhaps we will cover that another time.