“Shut up you CRANK!” How Trolls took a nasty term and made it even worse. 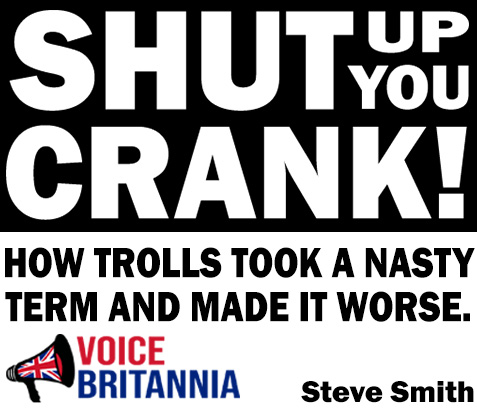 Historically, a crank was someone who drank their own piss, who believed in the flat earth, or it existed as an amphetamine-based dance-drug. However, the last few years of identity-based internet trolling has turned this from nasty yet harmless word into a slur which steeped in rhetorical excrement and connotative misdirection.

Before I get going; I believe there are people within political bubbles who don’t fully understand, and in turn get carried away with rhetoric. It is important to remember the black and white word-based world of politics is rarely compatible with the randomity of life.

My hope is that todays collection of words can help dial DOWN the heat. It has to end sooner or later!

Crank, as a pejorative term, has been on a bit the quest in recent years. Unlike ‘Gammon’, the stunningly apt catch-all term for the angry Brexiteer, Crank has slowly mutated from a tasteless, but an ultimately harmless slur on the mental faculties of Labours left, into one that malevolently labels political ‘opponents’ as racist, while at the same time saying they ARE crazy!

When I first saw the term crank used in political discourse my initial reaction was revulsion, as I take a dim view of people using or lying about anyone mental health. It is nasty and brings nothing to any debate. The reason the term ‘crank’ is specifically used, as opposed to more traditional slurs like ‘idiot’, ‘twat’ or ‘wanker’, all comes down to the art of Rhetoric.

Rhetoric is simply the name given to the art of persuasion, and back in the 4th century Aristotle literally wrote the book on it. In his writings, Aristotle identified the three routes to winning an argument, Ethos (credibility), Pathos (emotions) and Logos (logic and fact).

The term ‘crank’ makes use of ‘Ethos’ and the connotations of being crazy, annoying or easy to wind up, to damage the credibility of someone. As people get rightfully annoyed by being called a crank, possibly getting angry, they fall into the rhetorical trap; A no-win situation. By using the term crank in this way, it usually leads to an easy rhetorical win.

What was most worrying about the term Crank, was that it was not just trolling calling one person a crank, but rather, mainstream politicians and media personalities used their platforms to attack hundreds of thousands of people, calling them all cranks with the sole purpose of debasing their arguments then and for the future.

To say ‘things got messy’ would be an understatement.

The majority of those being called crank were not crazy, they were not racist and they simply did not deserve to have people with thousands if not millions of collective followers, all using this smear against a large amount of the Labour Parties paying membership.

One of the worst elements of this story (for me anyway) is that it all stemmed from a selfish intent to take out a twice-elected leader. This was not about stopping fascism or some ideologically demented group out of British politics; It was about silencing the support of the politician they most feared.

Now, the term crank persists in political discourse as a vile pejorative thats rolled out by trolls without a shred of responsibility. In many cases, when the discussion moves towards the topics of Palestine or Corbyn, the trolling starts. In these discussions, people are called cranks, foremost as a signifier of someones suspected racist intent, and also, that they might be ‘crazy’.

Smearing groups of people as cranks in an attempt to remove their political view on any issue is a worrying attack on democratic freedoms – And at the end of the day, it is an attack on free speech.

The only way to avoid falling into these rhetorical traps is by avoiding engaging with trolls. If someone calls you a crank – mute them, block them, filter them away, do whatever, just dont engage! If the final words in a discussion is someone calling you a crank, who really looks bad? The person who walked away peacefully or the person using a 1950’s slur?